Queen's Park Rangers manager Harry Redknapp demanded the 25-year-old Moroccan prove he was worth his weekly wage of about $100,000. 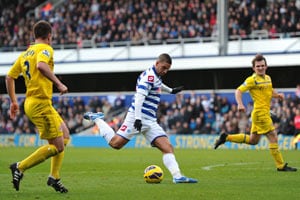 Queen's Park Rangers boss Harry Redknapp has blasted the weight and attitude of star midfielder Adel Taarabt who he said is carrying too many pounds to finish a game.

The Rangers boss hit out after his struggling side's narrow 3-2 defeat by Liverpool on Sunday.

Redknapp said the Moroccan had a problem attitude.

"He played in a reserve team game the other day, and I could have run about more than he did.

"And that's what I got today from the players.

"When he starts doing that, whether he ever can do it, maybe he'll get a game.

"The other lads, I've got a fantastic group of lads here, absolutely superb, all of them."

"What's the game coming to?

"The others are as good as gold," he said praising the side that were beaten by a last minute own goal by Steven Caulker.

Redknapp shrugged off speculation linking former Tottenham boss Tim Sherwood and others with the Rangers' job. He said the side are improving after a chaotic pre-season.

"I think you have to understand that two weeks before the season started I had 12 players," he said.

"Now I'm not making excuses, I had 12 players at this football club, outfield players.

"I went on tour to Ireland and I took 12 players with me.

"There wasn't another one injured, or hiding behind the training ground, that was what I had, 12, left over from last year's Championship.

"And it was a last-minute job when we had to bring players in.

"I couldn't give a monkey's about speculation. There's no one could do any better here at the moment than me, I don't think.

"I hear other names mentioned, but they couldn't do any better than what I can do, that's for sure," said the 67-year-old Redknapp, who is coming up to his second anniversary at Rangers.

Comments
Topics mentioned in this article
Adel Taarabt English Premier League Queens Park Rangers Football
Get the latest updates on ICC T20 Worldcup 2022, check out the Schedule and Live Score. Like us on Facebook or follow us on Twitter for more sports updates. You can also download the NDTV Cricket app for Android or iOS.