The 45-year-old Uruguayan, who previously coached second-tier Brighton and Hove Albion, succeeds Paolo Di Canio, who was sacked in September after only seven months in charge. 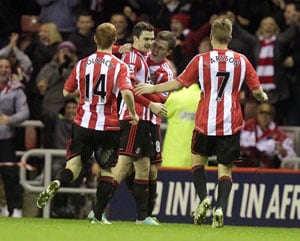 Premier League strugglers Sunderland have entrusted Gus Poyet with the responsibility of securing their top-flight survival, announcing on Tuesday that they have appointed him as manager on a two-year contract.

The 45-year-old Uruguayan, who previously worked at second-tier Brighton and Hove Albion, succeeds Paolo Di Canio, whose seven-month tenure left the northeast club at the foot of the table.

Di Canio was sacked last month with Kevin Ball placed in caretaker charge and Poyet arrives to find the club six points adrift of safety with only one point from their first seven games.

"We analysed a wide range of candidates and believe that Gus's track record, experience, commitment and passion make him the right man to take us forward," said Sunderland's Texan owner Ellis Short.

"We welcome him to Sunderland."

Poyet becomes Sunderland's sixth permanent head coach in less than five years and he will also be the first Uruguayan to manage a team in the Premier League.

He first came to England as a player in 1997, joining Chelsea from Real Zaragoza and winning the FA Cup, the now defunct UEFA Cup Winners' Cup, and the UEFA Super Cup, before spending three years at Tottenham Hotspur.

His managerial experience is limited to his four-year spell at Brighton but during that time he led the south coast club to promotion from third-tier League One in 2011 before guiding them to the Championship play-offs last season.

However, his time at the Amex Stadium ended on a sour note. He was suspended by the club following their play-off semi-final defeat by Crystal Palace and was informed of his dismissal during a live television appearance on the BBC.

He has also worked as a coach at Swindon Town, Leeds United and Spurs.

Poyet will be joined at the Stadium of Light by his former Brighton colleagues Mauricio Taricco and Charlie Oatway, and will work in conjunction with Sunderland director of football Roberto De Fanti.

His first game in charge will be a league game at Swansea City on October 19, followed by a first home game against derby rivals Newcastle United on October 27.

Comments
Topics mentioned in this article
Football Alex Ferguson Mark Hughes Sunderland Manchester City English Premier League
Get the latest updates on ICC T20 Worldcup 2022 and CWG 2022 check out the Schedule, Live Score and Medals Tally. Like us on Facebook or follow us on Twitter for more sports updates. You can also download the NDTV Cricket app for Android or iOS.