Frustration for Liverpool despite Maxi equaliser

Liverpool's top-four charge faltered despite Maxi Rodriguez's equaliser and Steven Gerrard's return from injury as the Reds were held to a 1-1 draw by struggling Blackburn on Monday. 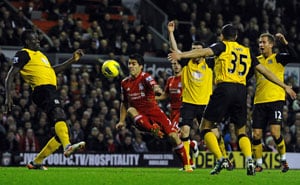 Liverpool's top-four charge faltered despite Maxi Rodriguez's equaliser and Steven Gerrard's return from injury as the Reds were held to a 1-1 draw by struggling Blackburn on Monday.

Gerrard appeared as a 69th minute substitute after recovering from injury yet even the presence of their influential captain failed to inspire Liverpool as bottom club Blackburn secured a priceless point.

Blackburn had threatened a shock win after Charlie Adam's own goal on the stroke of half-time at Anfield.

Rodriguez equalised eight minutes into the second half but on a bitterly frustrating afternoon for Liverpool, they were unable to find the winner as they looked to put the Luis Suarez race row controversy behind them.

Suarez, free to play until an appeal is heard, was given a warm reception on his first home appearance since being hit with an eight-match ban after being found guilty of racially abusing Manchester United's Patrice Evra.

Anfield was the scene of one of Blackburn's greatest-ever days in 1995 when Rovers, then managed by Dalglish, sealed the Premier League title despite losing 2-1.

But the Lancashire club's demise this season has been well documented and they arrived at the famous venue five points adrift of safety after three straight defeats.

Calls for Rovers boss Steve Kean's sacking have grown ever-louder, with the 44-year-old Scot overseeing 20 defeats and just seven victories in his previous 38 league games in charge since being appointed last December, but he will take heart from this display.

With Andy Carroll partnering Suarez up front, Liverpool carved out a string of chances before half-time yet their failings in front of goal once again resurfaced.

The Uruguay international fired over from a free-kick before finding the side netting from a good position in the 19th minute.

Still Liverpool continued to attack yet their frustration increased when they were denied a penalty after keeper Bunn appeared to foul Rodriguez. But the referee waved away the home team's appeals due to an offside flag.

It was all Liverpool as midfielders Adam and Jordan Henderson also attempted to find the breakthrough.

Yet the hosts were made to pay for their careless finishing after Daniel Agger conceded a needless corner which resulted in Adam, stationed at the front post, shinning the ball into the roof of his own net following Morten Gamst Pedersen's flag kick.

Blackburn's lead lasted all of eight minutes after poor defending allowed Rodriguez, one of the smallest players on the pitch, to head a 53rd minute equaliser after good play by Martin Skrtel.

Anfield erupted and the atmosphere was lifted even further when Gerrard climbed off the bench to make his first appearance for two months.

But Blackburn spurned a glorious chance to seal their first away win of the season when David Dunn was allowed to run unchallenged into the Liverpool penalty area before slipping at the crucial moment with the goal at his mercy.

Comments
Topics mentioned in this article
Football Frank Lampard Liverpool Maximiliano Rodriguez Brad Jones Mark Hughes Alex Ferguson Manchester City Steven Gerrard English Premier League
Get the latest updates on IPL 2020, check out the IPL Schedule for 2020 and Indian Premier League (IPL) Cricket live score . Like us on Facebook or follow us on Twitter for more sports updates. You can also download the NDTV Cricket app for Android or iOS.