In order to complete the move, the 23-year-old, who has been capped six times, has reportedly agreed to waive any signing-on fee, which would have amounted to a considerable sum had he waited until the summer to depart. 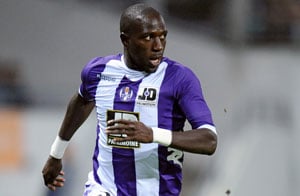 The 23-year-old Sissoko had six months left on his Toulouse contract and the French club sold him for an undisclosed fee, rather than risk losing him on a free transfer in the summer. Toulouse announced the transfer on its website on Thursday, without giving details, but reports said Newcastle paid 2.5 million ($3.3 million).

The central midfielder has made six international appearances for France and impressed as a substitute in the 1-1 draw at Spain in October.

"Moussa Sissoko will not finish his contract with TFC," which was due to expire in June, Toulouse announced in a statement.

"Agreement has been reached with Newcastle for a permanent transfer which takes effect today."

Earlier on Thursday, a source close to the negotiations told AFP that a deal was nearly complete that would see the French international of Malian origin move to Newcastle on a five-and-a-half-year contract.

Sissoko, who was left out of the Toulouse squad for Wednesday's French Cup defeat away to Paris Saint-Germain, had previously refused to leave the club this month or to extend his contract.

The player, who has been on the books at Toulouse since the age of 13, was told by president Olivier Sadran that he would be banished from the first team for the remainder of the campaign if he did not leave now.

"Olivier is now determined to see the move through, for him it's a matter of principal," a source close to the Toulouse president said earlier.

In order to complete the move, the 23-year-old, who has been capped six times, has reportedly agreed to waive any signing-on fee, which would have amounted to a considerable sum had he waited until the summer to depart.

Sissoko had previously claimed that he would have been prepared to "play for the reserves or even the under-14s until the end of the season."

Now he is set to join Newcastle's burgeoning colony of French players, following in the footsteps of centre-back Mapou Yanga-Mbiwa (Montpellier), right-back Mathieu Debuchy (Lille) and striker Yoan Gouffran (Bordeaux), who have all moved to Tyneside this month.

Six other Frenchmen were already on the books at Newcastle, in the shape of Yohan Cabaye, Romain Amalfitano, Hatem Ben Arfa, Sylvain Marveaux, Gabriel Obertan and Mehdi Abeid.

Sissoko, a powerful, leggy midfielder who has returned to the international set-up since the appointment of Didier Deschamps as France coach last summer, has made 192 Ligue 1 appearances for Toulouse, scoring 20 goals.

(With AP and AFP inputs)