Five-Star Manchester City Warm Up for Barcelona With Newcastle Rout

Edin Dzeko inspired a 5-0 demolition of Newcastle. Dzeko scored one and had a hand in two others, Sergio Aguero, Samir Nasri and David Silva, who netted twice, were also on the scoresheet for rampant Manchester City. 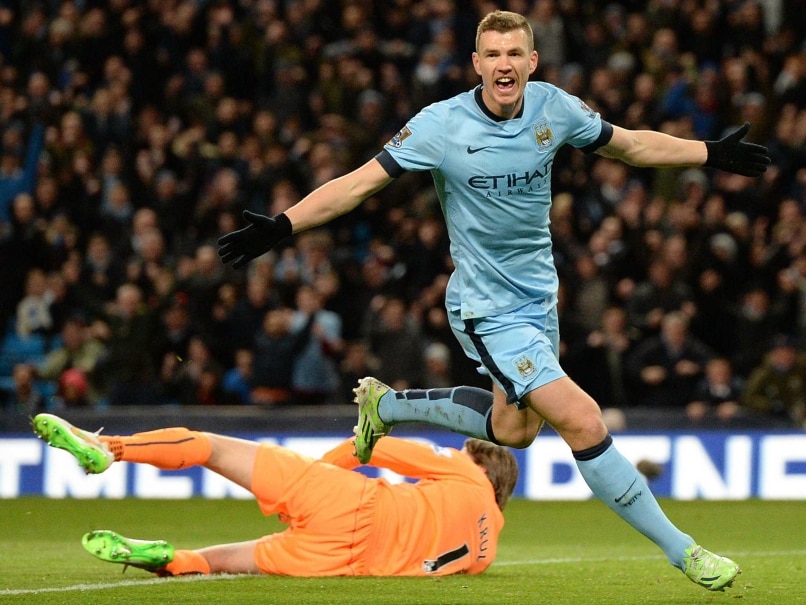 Manchester City enjoyed the perfect preparation for their Champions League showdown with Barcelona as Edin Dzeko inspired a 5-0 demolition of Newcastle at Eastlands on Saturday.

Dzeko scored one and had a hand in two others, ensuring Manuel Pellegrini's second placed side cut Chelsea's advantage at the top of the Premier League to five points following the surprise draw between the leaders and struggling Burnley earlier in the day.

Sergio Aguero, Samir Nasri and David Silva, who netted twice, were also on the scoresheet for rampant City.

And with new striker Wilfried Bony handed a debut by Pellegrini and key personnel showing the sort of form that has eluded them for much of the new year, City's biggest league win of the season will have been noted by Barca ahead of their visit to Manchester for the last 16 first leg on Tuesday.

The pre-game analysis had centred on Bony, who started on the bench, and the return to midfield of Yaya Toure, whose absence at the African Cup of Nations had coincided with champions City losing ground at the top of the table.

Yet it was Dzeko who dominated first half proceedings, from the moment inside the opening 30 seconds, when he pounced on Vurnon Anita's dreadful first touch, surged into the Newcastle area and was promptly brought down by the midfielder in his desperate attempt to make amends for his error.

Aguero displayed great poise to calmly roll the ball past a stationary Tim Krul as City took an early step towards recording an 11th consecutive league victory against the north-east opponents.

Nor did it take long for Dzeko to make a further impact on the game, a sure indication that the arrival of Bony has had the desired effect of inspiring the Bosnian, who came into the game without a league goal since late September.

Dzeko's darting 12th minute run down the right took him into the Newcastle area and his threaded pass to Nasri allowed the Frenchman to skilfully wrong-foot Fabricio Coloccini and scoop an unstoppable eight-yard shot into the roof of the net.

It was difficult to imagine a way back into the game for the visitors and Dzeko was about to make certain of that with still only 21 minutes on the clock.

Silva found space in midfield and lofted a sublime pass behind the Newcastle back four.

Coloccini mistimed a header which allowed Dzeko to time his run to perfection, take the ball on his chest and bury a textbook finish past Krul.

The second half promised to be a stroll for the hosts although, within seconds of the restart, Newcastle pieced together their best move of the day, a superb hanging cross from Moussa Sissoko which beat Vincent Kompany and found Papiss Cisse, whose excellent first-time volley brought an equally impressive reflex save from Joe Hart.

But the Newcastle response was shortlived and two Silva goals in as many minutes quickly had the rout back on course.

After 51 minutes, Aguero carved out the first with a darting, cross-field run that brought him to the edge of the area where his pass to Nasri was helped into the path of Silva, who turned in a simple finish from eight yards.

Barely 90 seconds later, Toure's long ball forward found Aguero on the edge of the Newcastle area, with the Argentinian enjoying a slight stroke of luck as he miscontrolled the ball on his chest into the path of Silva, who drove his shot past Krul from 18 yards.

Thereafter, Bony might have marked his debut with a goal, but Krul made up for his dreadful clearance by saving from the striker with an outstretched leg.

Comments
Topics mentioned in this article
Manchester City Newcastle United Edin Dzeko Sergio Aguero David Silva Samir Nasri English Premier League Football
Get the latest updates on SA vs IND 2021-22, check out the Schedule and Live Score . Like us on Facebook or follow us on Twitter for more sports updates. You can also download the NDTV Cricket app for Android or iOS.