West Ham have issued a strongly-worded warning to their fans that any repeat of that behaviour at Spurs, who have a strong link with the Jewish community, would result in a banning order and potential criminal charges. 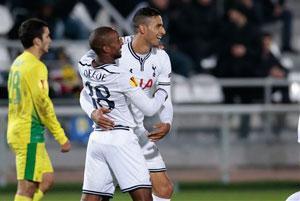 West Ham manager Sam Allardyce has warned fans who step out of line in Sunday's volatile clash at Tottenham that they will feel the wrath of the law.

Allardyce's east London outfit make the short trip across the capital to White Hart Lane for the first time since a section of their supporters brought shame on the club by chanting anti-Semitic abuse in the corresponding fixture in November last year.

Just four days after a Spurs fan was stabbed in an apparent anti-Semitic attack in Rome, a group of West Ham fans chanted "Viva Lazio" and "Can we stab you every week?" while some hissed, mimicking the gassing of Jews in the Holocaust.

With Tottenham and West Ham fans having a long history of violent clashes, there is widespread concern about more incidents at this weekend's derby.

West Ham have issued a strongly-worded warning to their fans that any repeat of that behaviour at Spurs, who have a strong link with the Jewish community, would result in a banning order and potential criminal charges.

"The club has made a statement so you will suffer the consequences if you do anything like that," Allardyce said.

"If they do it, I think that's very important that they are identified and they suffer the consequences.

"We live in this society today so if you're made aware of what's acceptable and what's not you've got to be very, very careful about what you choose to chant.

"If you're made aware of it and it happens you don't have any excuse.

"My message to the fans would be: support the lads on the field and forget about everything else."

As well as monitoring chants from the West Ham section of the ground, the Metropolitan Police will also keep tabs on Tottenham supporters after warning that they could arrest any fan chanting the word "Yid".

However, the police stance has caused consternation among many Tottenham fans.

Yid is a term for Jew which is often considered derogatory, but some Spurs fans chant the word, or refer to themselves as "Yiddos" or the "Yid Army", as an act of defiance towards those who taunt them over their Jewish fan base.

If peace breaks out in the stands, the focus will return to matters on the pitch, where third placed Tottenham will look to maintain the pressure on leaders Arsenal, who are two points clear at the top.

Spurs only arrived home to London in the early hours of Friday morning after their Europa League win over Anzhi Makhachkala in Russia on Thursday, but boss Andre Villas-Boas is confident there will be no European hangover.

First-half goals from Jermain Defoe and Nacer Chadli proved the difference in what was likely to be Spurs' toughest test of Group K and Villas-Boas is hopeful the draining trip won't be a factor against the Hammers.

"It is nothing different from what we've done in the past.

"We will try to get at least the minimum sleep, but from Friday to Saturday we will sleep well and recover the players for West Ham.

Villas-Boas will be without Younes Kaboul after the injury-plagued defender took a knock on Thursday, while Defoe is likely to have to make way for Spanish striker Roberto Soldado despite scoring seven times in eight appearances this season.

Whoever starts upfront will be confident of getting on the scoresheet against a West Ham side who are fourth bottom of the table and without a league win since the opening day.

Comments
Topics mentioned in this article
Manchester City Football Tottenham Hotspur Mark Hughes Alex Ferguson English Premier League
Get the latest updates on ICC T20 Worldcup 2022 and CWG 2022 check out the Schedule, Live Score and Medals Tally. Like us on Facebook or follow us on Twitter for more sports updates. You can also download the NDTV Cricket app for Android or iOS.