Everton published their annual financial results on Thursday, which suggested that funds were needed to help sustain the Toffees' run. 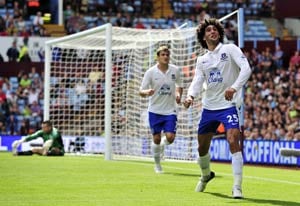 Everton chairman Bill Kenwright on Thursday said he was still looking for new investment, as the English Premier League club try to capitalise on their strong start to the season.

"My desire to find a person, or institution, with the finance to move us forward has not diminished," he said, a day after the Merseysiders moved to fifth in the league, two points below the Champions League places, after an away win at Newcastle.

Everton published their annual financial results on Thursday, which suggested that funds were needed to help sustain the Toffees' run.

Everton blamed the losses on their poor start to the campaign, which led to a fall in gate receipts but revealed that sales of season tickets had shot up 6.4 percent since the start of this season.

Club chief executive Robert Elstone said the increased expenditure on players' wages demonstrated their "commitment to first-team success" but manager David Moyes has said that he may not have much cash to spend during the January transfer window.

Instead, he told the Liverpool Daily Post newspaper that the most he could hope for was a couple of loan deals.

Comments
Topics mentioned in this article
Football Everton Manchester City Alex Ferguson Mark Hughes English Premier League
Get the latest updates on ICC T20 Worldcup 2022 and CWG 2022 check out the Schedule, Live Score and Medals Tally. Like us on Facebook or follow us on Twitter for more sports updates. You can also download the NDTV Cricket app for Android or iOS.