The Belgian marked his home debut with a brace in a 3-2 win at Goodison Park on Monday. 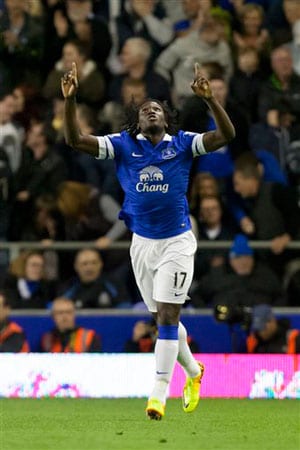 Everton forward Romelu Lukaku destroyed Newcastle as the Belgian marked his home debut with a double-strike in a 3-2 win at Goodison Park on Monday.

Toffees boss Roberto Martinez snapped up Lukaku on loan from Chelsea on transfer deadline day and the powerful 20-year-old looks set to be a big hit on Merseyside.

He netted on his Everton debut in a win at West Ham last weekend and followed that with a pair of clinical finishes to kill off Newcastle.

Lukaku's goals came either side of Ross Barkley's strike, which the Belgian also set up as Everton raced into a 3-0 lead before the break.

Yohan Cabaye and Loic Remy scored for Newcastle in the second half, but Alan Pardew's side had left it too late to complete a remarkable revival.

Everton remain unbeaten after six matches and their third win of the season lifts them into fourth place. (Points table)

"I loved it, I had waited to make my home debut for a long time," Lukaku said. "My team-mates really helped me and from minute one I was focused."

Martinez saluted his striker's sublime display, saying: "For a number nine to have that awareness of what was going on around him was tremendous. Romelu was unplayable.

"He is going to get stronger and the players around him will learn how to play with him.

"The first half was so dominant that sometimes unconsciously you drop the tempo, but overall I was pleased we controlled it for long periods. It's been a good start to the season."

Lukaku wasted little time making an impression as he showed great strength to hold off Mathieu Debuchy and slot past Tim Krul, only to see his strike disallowed for offside.

The Belgian didn't have to wait long for his first goal in an Everton shirt at Goodison however as he opened the scoring in the fifth minute.

He showed his aerial prowess by glancing a long punt upfield towards Kevin Mirallas, who surged clear down the right flank before whipping over a low cross that Lukaku, having raced in the penalty area, met with a cool close-range finish at the near post.

Lukaku then teed up England midfielder Barkley for a ferocious drive that flashed just the wrong side of the woodwork.

Newcastle's defence was creaking alarmingly as Everton pressed for a second goal and they were at full stretch to scramble the ball away after James McCarthy's shot was parried by Krul.

With Lukaku proving such a handful, Martinez's men were carving through the Newcastle back-four at will and it was no surprise when the hosts doubled their lead in the 25th minute.

Lukaku was the provider this time as he slipped a perfectly-weighted pass through to Barkley, who ran through the gaping hole in the Newcastle defence before steering his shot past Krul.

Pardew looked stunned on the touchline and his expression turned to one of fury as Newcastle conceded a comical third goal in the 37th minute.

A long kick downfield by Everton goalkeeper Tim Howard should have been dealt with by the visitors, but Krul allowed it to bounce past him and Lukaku pounced on the gift, tricking his way past Fabricio Coloccini before firing into the empty net.

Lukaku almost completed his hat-trick before half-time but his strike from Leon Osman's pass was ruled out for offside.

To their credit, Newcastle came out with more verve after the break despite the seemingly impossible task facing them and French midfielder Cabaye reduced the deficit in the 51st minute with a fine strike into the top corner from 20 yards out.

Gouffran went close to giving Newcastle even more hope when his shot whistled just wide, but by the time French forward Remy poked home in the 89th minute it was too late for Newcastle to avoid their third defeat of the season.