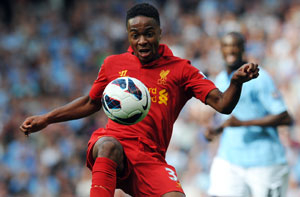 Sterling marked the first Premier League start of his career with a virtuoso performance in Sunday's 2-2 draw with City and the 17-year-old was rewarded with a glowing tribute from Rodgers.

After spending the last year watching Stewart Downing deliver a series of lacklustre displays on the wings for Liverpool, the arrival of the pacey Sterling was also greeted with delight on the Kop at Anfield.

Jamaica-born Sterling, who joined Liverpool from QPR two years ago, gave City defender Kolo Toure a torrid time and Rodgers claimed he never doubted the England youth international had what it takes to shine on the big stage.

"It was an easy decision. I said when I first came in, I wouldn't judge people on their status, on what they are or what they have done, but on what I see in front of me," Rodgers said.

"He is a young player who has just improved every single day since I came in here.

"He was a player that played on his own in the one v ones.

"And you look at him fighting for the team, his tactical understanding playing a really experienced player - he was blocking the lines of the pass, he was pressing at the right time, he was coming back to block the lines inside.

"For a 17-year-old playing against the champions, I thought his performance was fantastic but he has a long way to go because you have got to be consistent and that is something I'll have to keep a close eye on."

Liverpool are still looking for their first win of the season but morale at Anfield will be greatly enhanced after the Reds recovered from their woeful 3-0 defeat at West Bromwich Albion to deliver a more vibrant display against City.

Liverpool's Spanish left-back Jose Enrique is confident there is much better to come from the Reds once they adapt to Rodgers' desire for a slick passing style.

Jose Enrique likes the idea of dominating possession in the style of Barcelona, but he believes it will take time to emulate the Spanish giants.

"We are trying but because there is a new manager we need time. If we can play like this I think we will get many points," the former Villarreal and Newcastle left-back said.

"The best team in the world is the best example - Barcelona. You can see against Real Madrid a few days ago, how when they have the ball it is amazing and when they lose it, within three or four seconds they have it back.

"This the way we try to play. We can't compare with Barcelona - they are different, but we are trying to play like this.

"We are starting to learn but we are learning well."