Luke Shaw sealed the points seven minutes from time before Jamie Vardy headed home a consolation for the visitors. 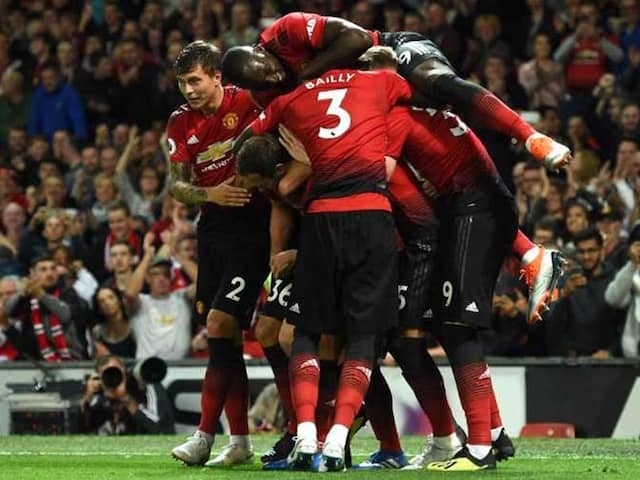 Manchester United made a winning start in the Premier League with a 2-1 victory over Leicester City.© AFP

Jose Mourinho hailed captain Paul Pogba's willingness to put his body on the line to lead Manchester United to a winning start in the Premier League with a 2-1 victory over Leicester City on Friday. Less than a month since Pogba scored in the World Cup final to help France lift the trophy, he was thrown straight into action by Mourinho despite just returning to pre-season training this week. Pogba's third-minute spot-kick settled the hosts' nerves as United allayed some of the doom and gloom predicted by Mourinho after failing to land a series of targets before Thursday's transfer deadline.

Luke Shaw sealed the points seven minutes from time before Jamie Vardy headed home a consolation for the visitors.

After a week in which Pogba has been linked with a move away from Old Trafford, with Barcelona's interest piqued by the Frenchman's frosty relationship with Mourinho after he was repeatedly dropped last season, the Portuguese showed his faith in the midfielder by surprisingly handing him the armband.

"Pogba was a monster," said Mourinho. "We thought maximum (he could play) 60 minutes, but he managed 80."

On top of his transfer troubles, Mourinho had a host of injuries and players lacking match sharpness after the World Cup to contend with.

"Paul was fantastic, his contribution was amazing but the fuel was disappearing. We were in trouble," added Mourinho.

"I don't remember in my career to be in so much in trouble to make my changes because I wanted to make five or six and I could only make three."

The hosts got a much-needed lift after just two minutes when Daniel Amartey was harshly adjudged by referee Andre Mariner to have handled Alexis Sanchez's shot.

Pogba resisted the pleas of Sanchez to take the spot-kick and after a prolonged stuttering run up, dispatched his shot into the top corner giving Kasper Schmeichel no chance to repeat his penalty saving heroics at the World Cup for Denmark.

"We don't have a penalty taker, it's how we feel and I decided to take it. Maybe on the next game I leave it to Alexis," said Pogba.

"I didn't have any pre-season games, I came back on Monday so it was very hard for the legs."

Mourinho was particularly annoyed to miss out on a series of centre-back targets, including Leicester's Harry Maguire who shone for England in Russia.

"It will be a difficult season for everybody, not just for us," said Mourinho. "I had my plans for many months and I find myself with the market closed in a situation I did not think I would be in."

However, he can still rely on one of the world's best goalkeepers as David de Gea put his poor World Cup showing behind him with a fine save to prevent James Maddison levelling.

Both sides' top scorers from last season, Romelu Lukaku and Vardy, started on the bench after their World Cup exertions and were introduced for the final quarter.

Vardy nearly made a vital contribution as provider when he outmuscled Shaw and picked out Gray in the middle who was denied by another fine save by De Gea.

Shaw, who himself has suffered plenty of criticism from Mourinho in the past two seasons, then appeared to make the game safe when he fired low into the far corner to spark wild celebrations from his manager.

"Even if I forget the goal, it was a complete performance," said Mourinho of the left-back's display.

Vardy pulled a goal back deep into stoppage time when he stooped to head in after Ricardo Pereira's cross came back off the post and United were forced to see out a nervy final few minutes to get off to a winning start.