A 6-3 victory meant that City have now won all eight of their home games this season, scoring 35 goals. 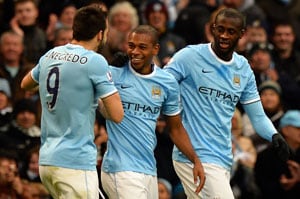 Manchester City asserted their Premier League title credentials with an extraordinary 6-3 defeat of leaders Arsenal on Saturday that took them to within three points of Arsene Wenger's side.

Sergio Aguero gave City a 14th-minute lead and Alvaro Negredo restored the hosts' advantage after Theo Walcott had marked his first start for Arsenal since September by equalising.

City lost Aguero to injury early in the second half, but a brace from Fernandinho, a David Silva strike and a Yaya Toure penalty secured victory for the 2012 champions, with Walcott and Per Mertesacker replying in vain.

City have now won all eight of their home games this season -- scoring 35 goals -- and climbed to second place in the table, although Chelsea can move above them by beating second-bottom Crystal Palace later on Saturday.

Held 1-1 at Southampton last weekend, City made a determined start at the Etihad Stadium and took the lead in the 14th minute.

Samir Nasri's right-wing corner was headed on by Martin Demichelis and Aguero hooked home a waist-high volley at the back post to notch his 15th goal in 13 games. Negredo spurned an opportunity to extend City's lead when he shot wide and Arsenal capitalised in the 31st minute, with Walcott bobbling a shot home from a Mesut Ozil pass after Aaron Ramsey robbed Toure.

Negredo again failed to find the target moments later, this time from Silva's pass, but he atoned in the 39th minute by tucking in a low cross from Pablo Zabaleta to restore the hosts' advantage.

To make matters worse for Arsenal, centre-back Laurent Koscielny had to be stretchered off after cutting his knee as he slid in alongside Negredo, with the club announcing via Twitter that he had suffered a "deep laceration".

City saw Aguero limp off early in the second half, but they extended their lead in the 50th minute when Fernandinho picked up a loose pass from Ozil and curled a sublime finish around Wojciech Szczesny.

Olivier Giroud squandered two chances to reduce the arrears, volleying over from a Jack Wilshere pass and then heading Bacary Sagna's cross fractionally wide, before Walcott struck again in the 63rd minute.

Ramsey dinked a pass behind the City defence for the England forward, who collected the ball and shaped a graceful shot into the top-right corner.

Silva converted a low cross from Jesus Navas and Fernandinho dinked home his second goal before Mertesacker headed in an injury-time consolation for Arsenal, only for Toure to complete the scoring from the spot after Szczesny tripped James Milner.