As Manchester City look for a second title in three seasons, Milner feels that the visit of Liverpool, and the following home game against Crystal Palace, offer City a real opportunity to take charge in the title race. 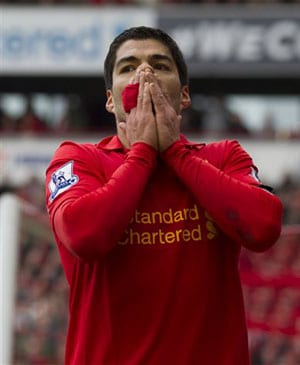 Manchester City midfielder James Milner says that his side will be facing one of the country's outstanding players when they host Luis Suarez and Premier League leaders Liverpool on Thursday. (Boxing Day shoot-out)

Uruguayan striker Suarez has already scored 19 league goals this term despite having been suspended until the end of September for biting Chelsea defender Branislav Ivanovic last season.

His run of form has helped Liverpool go top with a run of four straight wins, in which they have scored 17 goals, while City, who could move above the Reds with a win, have scored 16 in a similar run of four victories.

However, while Suarez will be the centre of attention, Milner feels it would be wrong to underestimate the rest of Brendan Rodgers's players.

And as City look for a second title in three seasons, Milner feels that the visit of Liverpool, and the following home game against Crystal Palace, offer City a real opportunity to take charge in the title race.

"(Suarez) is having a pretty good season," said the England midfielder.

"But Liverpool are a top side having a good season and it's not just about stopping him, because they have plenty of other players who can do damage as well.

"Against Fulham (who City beat 4-2 last weekend) we showed character to get those extra two goals at the end and get the win. These are the sort of games you have to win if you want to win the title.

"Now we have two games in quick succession, but we have the momentum to go into those games and hopefully get six points.

"Every game is very important for us. We dropped points earlier in the season so we need to keep going and build a winning run." 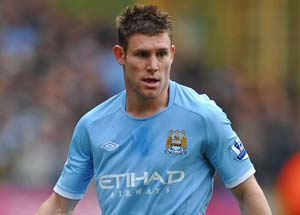 Liverpool defender Jon Flanagan is doubtful for the game with a tight hamstring and with Steven Gerrard, Daniel Sturridge and Jose Enrique still out, Rodgers has been training with just 17 players.

But he still sees the trip to City as a big chance for his team to lay down a marker.

"Our squad is very thin at the moment and we're down to 17 players, which is unfortunate coming into a busy period," said the Liverpool manager.

"These games are opportunities for us and we're not going to cry about it. We have what we have. The players have been brilliant.

While Liverpool have won all but one of their home matches this season, City have a perfect record of eight wins from their eight games on home turf.

Rodgers maintains that his side are going to the Etihad Stadium to attack, though, and says that his players are in buoyant mood after their fine recent form.

"They have confidence at home, they score goals, but they concede goals, so it makes for a really good game.

"We score, our focus is on this game and this game only and we know our possession game is in a good moment.

"They're going to lose that record at some stage of the season and it will depend on the team that can go there and have the bravery to play and get that bit of luck.

"We were the better side home and away against them last year so they'll know that we're a good side in a good moment."

Comments
Topics mentioned in this article
Mark Hughes James Milner Alex Ferguson Liverpool Football Manchester City Bayern Munchen English Premier League
Get the latest Cricket news, check out the India cricket schedule, Cricket live score . Like us on Facebook or follow us on Twitter for more sports updates. You can also download the NDTV Cricket app for Android or iOS.