It made him only the fifth goalkeeper to score in the English top flight since the Premier League was launched in 1992, but Jay Rodriguez's 42nd-minute equaliser prevented Begovic from being the match-winner. 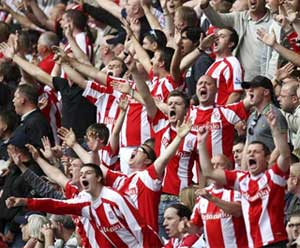 Stoke City goalkeeper Asmir Begovic scored one of the most peculiar goals in Premier League history on Saturday as his side drew 1-1 with Southampton.

There were just 13 seconds on the clock at the Britannia Stadium when the Bosnian's clearance from inside his own area was carried by the wind to the edge of the Southampton area before bouncing over opposite number Artur Boruc.

It made him only the fifth goalkeeper to score in the English top flight since the Premier League was launched in 1992, but Jay Rodriguez's 42nd-minute equaliser prevented Begovic from being the match-winner.

Despite dropping points for only the second time since mid-September, Southampton continue to fly high in fifth place, while Stoke climbed one place to 16th.

Regardless of the outcome, the day is destined to be remembered for Begovic's goal, which came after Southampton tamely conceded possession from kick-off.

Begovic launched the ball downfield from a position roughly level with the penalty spot and after Southampton's centre-backs allowed it to bounce, it suddenly picked up pace, looping over Boruc and rolling into the net.

The goal came almost four years since Maynor Figueroa found the net with a free-kick from the halfway line while playing against Stoke for Wigan Athletic.

Southampton seemed stunned by the goal, but they gradually regained their composure and drew level three minutes before half-time.

James Ward-Prowse's sweeping cross from the right picked out Rodriguez and he gave Begovic a taste of his own medicine with a downward header that thudded into the turf before billowing over the Stoke goalkeeper and into the net.

The visitors continued to press in the second period, with Ward-Prowse bending a free-kick onto the roof of the net.

Stoke had chances to win it, however, with Boruc thwarting Marko Arnautovic on two occasions and substitute Oussama Assaido shooting wide.

Begovic produced a brilliant save to deny Gaston Ramirez at the death, but although the flag was up for offside, he had already done enough to claim a share of the headlines.

Comments
Topics mentioned in this article
Football Alex Ferguson Jay Rodriguez Asmir Begovic Mark Hughes Bayern Munchen Manchester City English Premier League
Get the latest updates on India vs Australia and check out  Schedule, Results and Live Score. Like us on Facebook or follow us on Twitter for more sports updates. You can also download the NDTV Cricket app for Android or iOS.