EPL: Gerard Deulofeu salvages a point for Everton against Arsenal 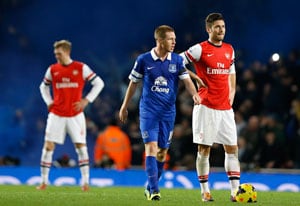 Everton substitute Gerard Deulofeu scored six minutes from time to salvage a deserved 1-1 draw at Arsenal on Sunday as the Gunners missed the chance to open a gap at the top of the Premier League standings.

On the back of their win at Manchester United midweek, Everton was the better team in the first half but Arsenal had the best chances after the interval as goalkeeper Tim Howard produced several decisive saves. Arsenal striker Olivier Giroud hit the crossbar in injury time.

Arsenal, which next plays Napoli in the Champions League before tough games against Manchester City and Chelsea, leads Liverpool and Chelsea by five points.

Comments
Topics mentioned in this article
Football Manchester City Everton Arsenal Alex Ferguson Gerard Deulofeu Mark Hughes Xabi Alonso Mesut Özil English Premier League
Get the latest updates on India vs Australia Series, check out the India vs Australia Schedule for 2020-21 and Ind vs Aus live score . Like us on Facebook or follow us on Twitter for more sports updates. You can also download the NDTV Cricket app for Android or iOS.