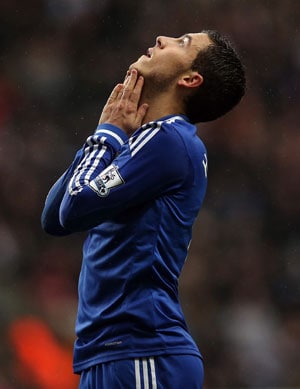 The Chelsea manager was heading for his first home defeat in 66 matches when Steven Reid was contentiously adjudged to have fouled Ramires and Hazard held his nerve amid angry West Brom protests to roll home an equaliser.

Samuel Eto'o had put the hosts in front, but West Brom hit back through Shane Long and Stephane Sessegnon to take Chelsea to the brink of a second consecutive league defeat following last weekend's 2-0 loss at Newcastle United.

Despite Hazard's equaliser, the Europa League champions slipped to fourth place, four points below leaders Arsenal, who could move even further clear if they win at Manchester United on Sunday.

Mourinho had restored Hazard to his starting XI after the Belgian attacking midfielder was dropped for the mid-week win over Schalke following his late return from an authorised trip to France.

The 22-year-old seemed eager to atone and was the catalyst for his side's opener on the stroke of half-time, with a low shot that was pushed out by West Brom goalkeeper Boaz Myhill, only for Eto'o to poke the rebound home.

Chelsea led for only 16 minutes, however, with Long outjumping John Terry and Frank Lampard to head home an equaliser after Petr Cech had pushed Gareth McAuley's powerful header into the air.

Things got worse for Chelsea in the 68th minute and Cech bore a sizeable degree of culpability, allowing a tame shot from Sessegnon to squirm beneath him.

West Brom manager Steve Clarke, Mourinho's former assistant, looked destined to enjoy a famous victory over his former mentor, only for referee Andre Marriner to point to the spot after Ramires threw himself against Reid and went down, to the anger and disbelief of the visiting players.

Liverpool capitalised on Chelsea's slip-up by crushing Fulham 4-0 at Anfield to climb to second place, two points below Arsenal. 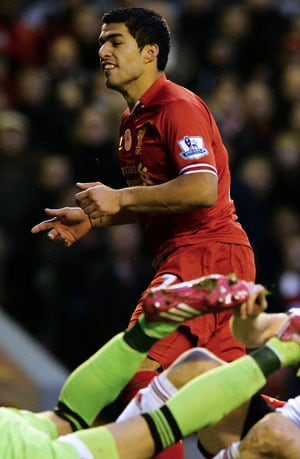 Manager Brendan Rodgers reacted to his side's 2-0 defeat at Arsenal by jettisoning his experiment with a three-man defence and the changes seemed to have a positive effect as the hosts romped to victory.

An own goal from Fernando Amorebieta, a Martin Skrtel header and a Luis Suarez effort put Liverpool 3-0 up inside 36 minutes, with Suarez adding a second goal in the 54th minute to take his tally of league goals to eight.

New England call-up Adam Lallana impressed in front of watching national coach Roy Hodgson as surprise package Southampton climbed to third in the table with a 4-1 win at home to Hull City.

Lallana has been called into the England squad alongside uncapped team-mate Jay Rodriguez, but it was another of Southampton's England internationals, Rickie Lambert, who tipped the game in the home side's favour.

It was from a Lambert knock-down that Morgan Schneiderlin headed Southampton into a 16th-minute lead and the 31-year-old striker made it 2-0 with an emphatic penalty after Lallana was felled by Steve Harper.

Lallana added a fine third eight minutes before half-time, wriggling down the left-hand channel and beating Harper with a cool finish, with Steven Davis completing victory after Yannick Sagbo replied for Hull.

A Leandro Bacuna free-kick and a Libor Kozak header gave Aston Villa 2-0 win at home to Cardiff City to hand Paul Lambert's side a first win in five league matches.

Kick-off in Everton's game at Crystal Palace was delayed by 15 minutes due to traffic problems around Selhurst Park ahead of the game.

Comments
Topics mentioned in this article
Football English Premier League Shane Long
Get the latest updates on ICC T20 Worldcup 2022 and CWG 2022 check out the Schedule, Live Score and Medals Tally. Like us on Facebook or follow us on Twitter for more sports updates. You can also download the NDTV Cricket app for Android or iOS.