United travel to Aston Villa on Sunday for a league fixture that they have not lost since 1995, but with the champions already 13 points behind leaders Arsenal, their grip on the title is weakening. 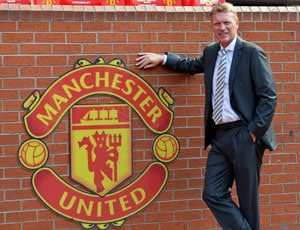 Manager David Moyes wants Manchester United to clear their minds of title talk as they look to avoid losing three successive Premier League games for the first time since 2001.

United travel to Aston Villa on Sunday for a league fixture that they have not lost since 1995, but with the champions already 13 points behind leaders Arsenal, their grip on the title is weakening.

However, Moyes believes that discussing the possibility of closing the gap and winning a 21st league title has to stop until they get back in the mix with the other contenders.

"The gap is bigger than we would like it to be," he said. "We would like to be closer. We can only do one game at a time. Let's look at it later on next year and let us see if we can answer the question better then.

"This club expected to win all the games. That is the fact and that is why if you lose one or two then things get said. I knew that was the situation before I got the job, I understand that.

"There are a lot of games we can get points in, but we need to go and do it, not talk about it. We need to make sure it happens on the field."

United will be without striker Robin Van Persie, who has been ruled out for a month with a thigh strain.

Moyes described the absence of last season's top goalscorer as a "big blow" and he is also expected to be without Michael Carrick, Marouane Fellaini, Patrice Evra and Nemanja Vidic.

Wayne Rooney is set to return to league action after missing last weekend's defeat by Newcastle United through suspension after he picked up his fifth booking of the season in the loss against Everton just four days before.

The England striker will make his 500th club appearance if he features against Villa and Moyes expects him to pick up plenty more with a midfield role a possibility later in his career.

"He can go far in terms of numbers because as he gets older, he is adaptable and such a good football player," Moyes said.

"Maybe if he gets older and loses a bit of his pace he can always drop a bit deeper and can play deeper. The big thing for Wayne is that there are some big targets ahead for him.

"There are some fantastic legends around this club and Wayne has got a chance to turn out to be one of them. He already is with what he does but I am talking real, real top status."

For all United's early-season struggles, Aston Villa manager Paul Lambert does not buy into the belief that the dominant force of the last 20 years are now in decline.

"It's the same group of lads who had the mentality of winning things," Lambert said.

"Maybe the difference is from the outside looking in, you can't afford to drop. That's the high standard Man United have set, not just over five to 10 years, over 20 years, (former manager Alex) Ferguson's reign. People jump on the bandwagon saying they are a spent force but I don't buy into that."

However, Lambert says his side will not be concerned by their poor record at home to United and will go out to attack the champions.

"I have good faith in the lads to go on the front foot," he said. "If we can do that, we will make it a game, that's for sure."

Beaten 2-0 at Fulham last weekend, which was their first defeat in six league games, Aston Villa are in 11th place in the table ahead of the weekend's fixtures, three points below United.

Comments
Topics mentioned in this article
Football Alex Ferguson Nemanja Vidic Wayne Rooney Mark Hughes Chelsea Liverpool Manchester City Arsenal Aston Villa Manchester United English Premier League
Get the latest updates on India vs Australia and check out  Schedule, Results and Live Score. Like us on Facebook or follow us on Twitter for more sports updates. You can also download the NDTV Cricket app for Android or iOS.