Christian Benteke pounced on a flicked pass from Adam Lallana to place a low finish into the bottom corner, just 22 seconds into the second half to give Liverpool the lead in their English Premier League clash against Sunderland. 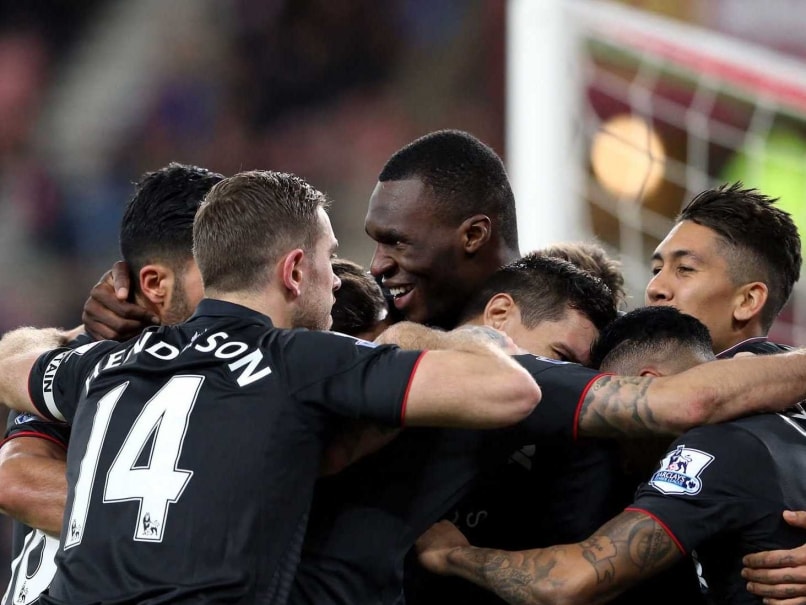 Christian Benteke celebrates with teammates after scoring against Sunderland in the English Premier League.© AP
Sunderland:

Christian Benteke scored a winning goal for the second straight game as Liverpool beat Sunderland 1-0 in the English Premier League to stay in the hunt for Champions League qualification on Wednesday.

The striker pounced on a flicked pass from Adam Lallana to place a low finish into the bottom corner, just 22 seconds into the second half. Benteke earned Liverpool a 1-0 victory over Leicester on Saturday, too.

Liverpool climbed to seventh in the standings, tied for points with Manchester United but behind its great rival on goal difference, and five points off the top four with exactly half the season gone.

Sunderland stayed next to last with its fifth straight loss in December, and fell seven points from safety as recently hired manager Sam Allardyce struggles to turn around the fortunes of the perennial relegation contender. Sunderland's home game against last-place Aston Villa on Saturday assumes even greater significance.

It was Benteke's sixth goal in seven career games against Sunderland - more than he has scored against any other club - and another step in the right direction for a player who hasn't been a regular since joining from Aston Villa for 32.5 million pounds (then $50.7 million) in July.

"I came to Liverpool to try to score a lot of goals, I'm in good shape," said Benteke, who has six league goals this season. "I hope I can keep it up."

Some have questioned whether the tall, imposing Benteke fits into the high-tempo, high-energy style of play favored by Liverpool manager Juergen Klopp, and he said this week that he has been told by the German coach to "run more."

Benteke prodded in a scrappy winner against Leicester on Saturday, but this one was more clinical, pouncing on Lallana's flick of Nathaniel Clyne's forward pass to find space behind Sunderland's defense and locate the far corner with a low finish. Lallana later acknowledged he didn't intend for the ball to reach Benteke.

"It's a lucky, lucky goal," Allardyce said. "Lallana tries to control it and it comes off his toe."

Klopp preferred to praise his striker.

"It's Christian Benteke time," Klopp said. "He has the nose for this, the skills."

It was a sloppy goal to concede from Sunderland, whose players switched off after the restart after defending well in the first half.

Recalled Sunderland goalkeeper Vito Mannone saved twice from efforts from Roberto Firmino - one being a wonderful intervention onto the post with his fingertips - and denied Benteke a second goal in second-half stoppage time in a one-on-one chance.

Sunderland lost midfielder Jack Rodwell in the first half to another injury, and rarely threatened Liverpool goalkeeper Simon Mignolet.

Liverpool had lost its last two away games, to Newcastle and Watford, to hurt its top-four ambitions but is in the thick of what's proving a tight fight for the European places.

Comments
Topics mentioned in this article
Liverpool Sunderland Christian Benteke English Premier League Football
Get the latest updates on SA vs IND 2021-22, check out the Schedule and Live Score . Like us on Facebook or follow us on Twitter for more sports updates. You can also download the NDTV Cricket app for Android or iOS.