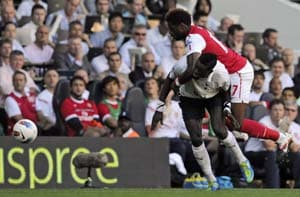 Adebayor has had to endure plenty of taunts from Arsenal supporters since he left the Gunners to join Manchester City in 2009, but the abuse reached a new low with songs about the gun attack on Togo's team bus during the 2010 African Nations Cup in Angola.

The 27-year-old survived the terrorist attack but three members of the Togo party were killed, including Adebayor's friend Stanislas Ocloo, who was the team's media officer.

Spurs boss Harry Redknapp and Arsenal manager Arsene Wenger have condemned the chants, but Adebayor is adamant they had no impact on him during Spurs' 2-1 victory at White Hart Lane.

He told The Sun: "The songs that they sung about me were very bad, but was I surprised? No. Disappointed? Yes.

"Obviously it was all meant to hurt me, to upset me, to anger me.

"But those chants won't ever have an effect on me. I've been through too many difficult times to let a minority of people singing silly songs affect my performance.

"But if I can survive the bullets in Angola then a few mindless insults will have little impact."

Adebayor, who joined Spurs on loan from City earlier this season, knows Arsenal fans will never forgive him for celebrating a City goal against the Gunners by running the length of the pitch before sliding to his knees in front of his former club's supporters.

But he is still saddened that they would stoop so low to try to get back at him.

"It's very sad how the memory of something so awful could be used in such an awful way," he added.

"To be honest I wasn't surprised by it, I had been expecting something and it didn't affect me at all. I have learnt a lot in the last few years and the best response is a positive performance.

"I just blocked it all out and concentrated on playing my best. I just hope that people remember this game for the right reasons and how well we played as it was being shown all around the world.

"It'd be a great shame if they just remember the stupid songs and not the great football. I'm so glad I kept my dignity in the face of people behaving like that."

Comments
Topics mentioned in this article
Arsenal Tottenham Hotspur Football Mark Hughes Alex Ferguson Manchester City Emmanuel Adebayor Chelsea English Premier League
Get the latest updates on ICC Women's Cricket World Cup 2022 and IPL 2022, check out the Schedule , Live Score and IPL Points Table. Like us on Facebook or follow us on Twitter for more sports updates. You can also download the NDTV Cricket app for Android or iOS.