A 2-1 victory over Stoke City lifted Tottenham into fourth place, the last qualifying position for the Champions League; two points ahead of Arsenal, who face FA Cup winners Wigan Athletic on Tuesday. 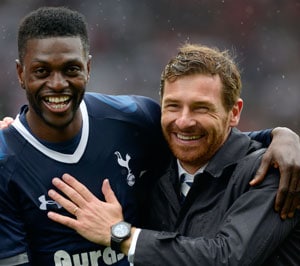 Tottenham Hotspur improved their chances of playing Champions League football next season with a hard-earned 2-1 victory over Stoke City at the Britannia Stadium on Sunday.

Stoke, who played the second half with 10 men after the dismissal of their Scotland midfielder, Charlie Adam, took an early lead through Steven Nzonzi.

But Tottenham levelled with a goal from Clint Dempsey and scrambled the crucial three points with a late decider from Togolese striker Emmanuel Adebayor.

Tottenham arrived knowing that they could not afford to drop points. Chelsea's 2-1 win at Aston Villa the previous day, inspired by record-breaking midfielder Frank Lampard, meant only Arsenal were catchable.

But the visitors found themselves trailing before they had time to settle, and with the ground still buzzing from celebrating Stoke's 150th anniversary.

Adam took a superbly flighted free-kick from the right touchline after Ryan Shotton was fouled by Dempsey, and the ball was met by a fine near-post header from Nzonzi that went in off the woodwork.

Tottenham were quick to respond, with Footballer of the Year Gareth Bale delivering a fierce shot from range that Stoke goalkeeper Asmir Begovic was happy to tip over his crossbar.

They had the ball in the net after 16 minutes, but Dempsey was flagged offside after back-heeling the ball into the net following Kyle Walker's shot from an Aaron Lennon cross.

Tottenham did draw level after 20 minutes when a clearance from Marc Wilson succeeded only in finding Dempsey and, with Begovic out of position, the midfielder flighted the ball beyond him with a shot from 25 yards.

Stoke put up strong resistance as Tottenham threatened to take control. Robert Huth was booked for bringing down Bale, and tempers frayed over a disputed throw-in that led to a Bale free-kick from which Tottenham almost claimed a second Tottenham goal.

Begovic did well to parry Michael Dawson's header from the kick but was then booked for dissent by referee Kevin Friend, who soon after showed the yellow card to Adam for a reckless challenge on Jan Vertonghen.

Adam earned jeers from the visiting fans, who had not forgotten his feud with Bale over a tackle that put the Wales player out of the game for three months with a damaged ankle.

The former Liverpool midfielder began the second half with another illegal challenge on Vertonghen, leaving the referee no option but to send him off for a second bookable offence on 47 minutes.

It left Stoke to play the second half with 10 men, manager Tony Pulis replacing former Tottenham winger Matthew Etherington with a defender, Andy Wilkinson, in an attempt to hold onto a point.

Tottenham found it difficult to penetrate a determined Stoke defence, although Bale shot narrowly wide on 74 minutes, but they eventually found the stroke of luck they needed to win.

Bale's through ball took a deflection off a Stoke defender to play Dempsey onside, and his low cross evaded Begovic to allow Adebayor at the far post a simple finish.