Dwight Gayle, Stuart O'Keefe get Crystal Palace off the mark

Ian Holloway's Palace will now go into their daunting trip to Manchester United in two weeks' time with three points on the board, while Paolo Di Canio's Sunderland have taken just one point from a possible nine. 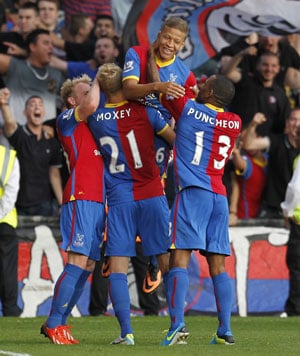 Danny Gabbidon gave hosts Palace a fortuitous early lead, only for Steven Fletcher to mark his comeback from injury with an equaliser mid-way through the second period.

It looked like both teams would have to wait for their first victory of the campaign, only for Gayle to restore Palace's lead with a 79th-minute penalty after Sunderland captain John O'Shea was sent off for a last-man foul on the 23-year-old.

O'Keefe then curled a marvellous shot into the top-left corner from the edge of the box to further delight the home fans basking in the late-summer sunshine at Selhurst Park.

Ian Holloway's Palace will now go into their daunting trip to Manchester United in two weeks' time with three points on the board, while Paolo Di Canio's Sunderland have taken just one point from a possible nine.

Sunderland had conceded goals from set pieces in both their previous games, a 1-0 loss at home to Fulham and a 1-1 draw at Southampton, but Palace's ninth-minute opener suggested they had not learn their lesson.

A left-wing corner from Jose Campana was allowed to land inside the six-yard box and after bouncing off Sunderland defender Ondrej Celustka, it struck Gabbidon and rebounded into the net.

Fletcher made his return from a five-month lay-off with an ankle injury as a half-time substitute, but Palace continued to threaten.

Mile Jedinak shot narrowly over for the second time in the game, while Gayle almost lobbed Sunderland goalkeeper Keiren Westwood after centre-back Modibo Diakite sloppily allowed the ball to run across him.

However, the visitors survived, and in the 64th minute they drew level when Fletcher met Jack Colback's left-wing cross with a header into the bottom-left corner.

Palace substitute Jonny Williams spurned a good chance to restore the hosts' lead when he screwed badly wide from the edge of the area, before Gabbidon almost put through his own goal at the other end as he toed the ball away from Fletcher.

It was Sunderland who cracked first, however, with close-season signing Gayle drilling home from the penalty spot before O'Keefe added a glorious third in stoppage time.

Comments
Topics mentioned in this article
Football Stuart O'Keefe Alex Ferguson Dwight Gayle Mark Hughes Manchester City English Premier League
Get the latest updates on IPL 2020, check out the IPL Schedule for 2020 and Indian Premier League (IPL) Cricket live score . Like us on Facebook or follow us on Twitter for more sports updates. You can also download the NDTV Cricket app for Android or iOS.