Luis Suarez earned a 1-1 draw for Liverpool at Chelsea on Sunday after John Terry made a goal-scoring return from suspension but also picked up a serious-looking injury. 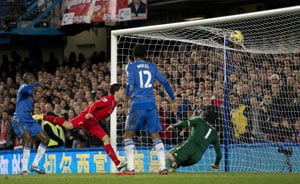 Luis Suarez earned a 1-1 draw for Liverpool at Chelsea on Sunday after John Terry made a goal-scoring return from suspension but also picked up a serious-looking injury.

Terry, returning to Premier League action after his suspension for racially abusing Queens Park Rangers defender Anton Ferdinand, opened the scoring for Chelsea with a powerful header in the first half.

But he was carried off with a knee injury before the interval after an accidental collision with Suarez.

Suarez, who was banned himself for racial abuse last season, headed in the equaliser with 17 minutes left and could have won the game when he raced through soon after, only to be foiled by Chelsea goalkeeper Petr Cech.

The draw meant Roberto Di Matteo's side failed to exploit the chance to put real pressure on leaders Manchester United, who now enjoy a three-point lead over the European champions.

Terry had missed four domestic games prior to Sunday's encounter at Stamford Bridge, although he had played in the Champions League and was an unused substitute in the 3-2 win at home to Shakhtar Donetsk on Wednesday.

The former England captain used his programme notes to thank fans for their reaction when he warmed up against the Ukrainian champions.

"It was an incredible feeling -- the Chelsea fans mean everything to me and that gave me goosebumps," he wrote.

He was celebrating in front of them after 20 minutes when he headed home the opener.

Daniel Agger had lost Terry as Juan Mata sent over a corner, with the Chelsea captain taking full advantage of the space and thumping his header into the top-right corner for his 50th Chelsea goal.

The hosts deserved their lead after having the better of the early exchanges.

Oscar had the first chance of the game after Joe Allen was caught in possession by the Brazil midfielder.

Eden Hazard slipped the ball through and Oscar's finish was just over Brad Jones' crossbar.

The visitors were set up in a different formation, using three central defenders to look after former Liverpool striker Fernando Torres and with wing-backs in Glen Johnson and Jose Enrique.

Raheem Sterling was used as a support striker but Brendan Rodgers' team struggled to create clear-cut chances in the early stages, with Nuri Sahin and Agger trying their luck from distance.

Terry had not looked in any trouble defensively but suffered his freak injury 10 minutes before the break.

As he tackled Suarez on the edge of the penalty area the Liverpool striker lost his footing and tumbled onto Terry's right leg, which was planted on the floor.

Terry instantly signalled to the bench that he was hurt and he was carried off on a stretcher, with Gary Cahill coming on.

Chelsea could have gone into the break two goals ahead when Oscar played Mata through and the Spaniard slipped the ball between Andre Wisdom's legs before lifting a shot over.

Mata had another chance just after the break when he drove in from the right and arrowed an effort just wide.

Torres also went close, meeting Oscar's free-kick but seeing his flicked header saved by visiting goalkeeper Brad Jones, who used his knee to save the effort.

Steven Gerrard looked to have injured his knee clearing the danger, but was able to carry on.

The next chance went to Torres again when Ryan Bertrand crossed to the near post after being sent away by Mata, but Torres' finish went wide.

Liverpool made Torres pay for his wastefulness when they equalised in the 73rd minute.

Suso's right-wing corner was headed on by Jamie Carragher and Suarez escaped Ramires' attentions to nod home from point-blank range.

Suarez raced through again before the end but Cech rushed out to block and the Czech goalkeeper was also on hand to parry Enrique's rising drive in stoppage time.