Liverpool were the dominant force in English football when United manager Ferguson arrived at Old Trafford in 1986, with the Scot declaring his aim was to knock them "off their perch". 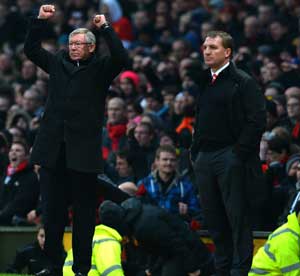 Alex Ferguson has said it will always be important to him for Manchester United to beat Liverpool, no matter where their north-west rivals stand in the Premier League.

Top-flight leaders United overcame a late Liverpool rally to claim a 2-1 win over the Merseysiders at Old Trafford on Sunday.

United ended the weekend still seven points clear at the top of the table after second-placed reigning champions Manchester City won 2-0 away to Arsenal later on Sunday.

This victory also saw United go a huge 24 points in front of Liverpool, who remained eighth.

Liverpool were the dominant force in English football when United manager Ferguson arrived at Old Trafford in 1986, with the Scot declaring his aim was to knock them "off their perch".

United have won a record 19 English championships compared to Liverpool's previous best of 18, so Ferguson can be said to have succeeded in his goal, especially as you have to go back to 1990, before the advent of the Premier League for the last of the Anfield club's titles.

"Winning these games are important, it doesn't matter what position we are in the league," said Ferguson.

"Manchester United and Liverpool games are a fantastic challenge between two of the most successful teams in the country and those three points are hopefully very important for us."

The hosts doubled their advantage in the 54th minute when van Persie turned provider to find Patrice Evra with a curling free-kick at the back post, with the Frenchman's header deflected in by United defender Nemanja Vidic.

After being dominated in the first half, Liverpool sent on Daniel Sturridge at the break and the £12 million ($19 million) recent signing from Chelsea got them back into the game when he tapped home after United goalkeeper David de Gea palmed Steven Gerrard's shot into his path.

Despite a few late scares with Fabio Borini and Sturridge going close for Liverpool, United clung on to all three points.

"Until the second goal we were magnificent, it was as good a performance we've had for a long time," said Ferguson.

"But when they got the goal they were inspired -- their supporters got going and it was hard work after that to be honest. I'm just glad we won the match."

Liverpool manager Brendan Rodgers believes his side's second-half display proves they are starting to close the gap on United.

"I think this performances gives us great hope," Rodgers said. "We are 24 points behind Manchester United but we are not behind 24 points in quality.

"Once we close the gap in terms of the squad depth, I have great faith we will be able to challenge."

Rodgers believes his side can learn from the example of United, who were overshadowed by Liverpool in the 1970s and 1980s before Ferguson arrived to change their fortunes.

"To win these games sets you off on a total different direction, we have to do that," said Rodgers. "We have got great hope in the future and how we work. It's going to be a long journey but it is about closing the gap in squad depth."