Moyes played Danny Welbeck as a lone striker in his first line-up, weakened by a number of absences including Robin van Persie and the unsettled Wayne Rooney, who abruptly left the tour with a hamstring injury. 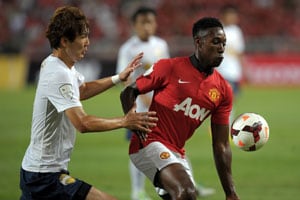 David Moyes's reign at Manchester United began with an embarrassing upset as the Premier League champions slumped to a 1-0 defeat against Thailand's Singha All-Star XI in Bangkok on Saturday.

The new manager sat grim-faced on the bench as the highly paid visitors, who have been given a hero's welcome in Thailand, failed to recover after falling behind early in the second half.

United were missing Robin van Persie, Wayne Rooney, Nani and captain Nemanja Vidic among others, but they can have few complaints after making a sluggish start and allowing the All-Stars repeated chances.

The result, albeit in a friendly and with an inexperienced team, does nothing to ease the task of Moyes as he seeks to follow Alex Ferguson's 27-year, 38-trophy stint at the world's most famous club.

But the Scotsman, who has also had to deal with repeated speculation about the future of the unsettled Rooney in his first weeks in charge, played down the insipid performance.

"I hope not," said Moyes, when asked if the result was a bad omen. "If I was going to lose any games I'm happy to lose these ones, that's for sure."

He added: "It wasn't a brilliant result but I was more pleased with the way the players kept going. We gave a lot of young players an opportunity. I'm disappointed we didn't get something out of the game.

"What we did get out of it was certainly a real good fitness work-out -- anyone watching that will tell you it was very hot."

Fans had paid up to 4,000 baht ($130) for tickets but they may have been left feeling short-changed after a slow start to the match on a sultry evening in suburban Bangkok.

Moyes played Danny Welbeck as a lone striker in his first line-up, after Rooney abruptly left the tour with a hamstring injury, with Anderson in the playmaker role flanked by Ryan Giggs and Belgian teen Adnan Januzaj.

But it was the host team, comprised of the best players from the Thai league, who almost seized the initiative when Teeratep Winothai raced through early on only to be denied by Jonny Evans' last-ditch tackle.

Debutant Januzaj, 18, was United's stand-out player in the first half, darting from wing to wing and showing a full range of tricks and passes, but he spurned a great chance when he volleyed over from a Fabio cross.

Slow handclaps and the dreaded Mexican wave pervaded Rajamangala Stadium and the stuttering visitors' cause was not helped when leftback Alex Buttner went off with a minor right hamstring problem.

Teeratep drew the best from Ben Amos when his fierce shot was palmed away by the United goalkeeper, in what turned out to be the nearest either side came to scoring in the first period.

United were expected to up the tempo in the second half but it was Teeratep, the diminutive Bangkok Glass forward, who shattered the deadlock when he beat Amos at his near post on 49 minutes.

Januzaj fired a half-chance at Thai goalie Narit Taweekul and Wilfried Zaha, the exciting new signing from Crystal Palace, should have done better with a far-post header with 15 minutes left.

Inside the last 10 minutes, England striker Welbeck brought down a raking Giggs cross with great control but he then pushed an easy shot wide, and Zaha rattled the woodwork as United pressed in vain.

Moyes will hope for better from his players on the rest of the trip to Australia, Japan, Hong Kong and Sweden, before they begin their Premier League title defence on August 17.

But he can at least console himself that Ferguson's time in charge also started inauspiciously, with a 2-0 defeat at Oxford United in 1986.

Moyes's opposite number, All-Stars coach Piyapong Pue-On, admitted he was "quite surprised at beating the number one team in the world".

"I'm going to have a big laugh in the dressing room," he said.