Moyes said he planned to use van Persie in the second half of United's pre-season matches in Australia, Japan and Hong Kong to build-up his match fitness for the new campaign. 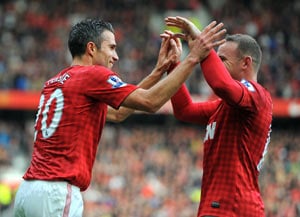 Manchester United boss David Moyes on Friday said that he hopes Robin van Persie will have as big an impact in the new English Premier League season as he did in his spectacular debut year.

The Dutch international striker was a huge hit at Old Trafford last season after switching from Arsenal and was the Golden Boot winner in England's top flight, banging in a total of 30 goals in 48 appearances.

Moyes, who has taken charge of Manchester United after the retirement of 13-time EPL-winning manager Alex Ferguson, said he was excited about having van Persie in his lineup when the new season kicks off against Swansea City on August 17.

Van Persie only joined the team's pre-season tour this week in Sydney after missing last weekend's 1-0 loss to Thailand's Singha All-Star XI in Bangkok and is expected to come off the bench in Saturday's game against the Australian A-League All Stars.

"We've enjoyed him being here. He met up with us when we arrived in Sydney, he's trained quite a bit on his own," Moyes told a press conference.

"I'm really looking forward to seeing him start and get him playing again. He was a massively important player for Manchester last season and (we're) hoping he'll have as big an influence again this season.

"I got to see him this week for the first time and I mean his control, his touch, his awareness, just in small games we've played this week," he added.

"I've really been impressed by his professionalism as well, the way he's gone about his work, he's trained hard this week."

Moyes said he wanted to get van Persie to peak fitness.

"So what we are doing is trying to get him into a condition where he is ready to do exactly what he's done last season which was score goals for Manchester United and he was a really big influence in the team. So we're hoping to get more of that this season," he said.

Moyes said he planned to use van Persie in the second half of United's pre-season matches in Australia, Japan and Hong Kong to build-up his match fitness for the new campaign.

"He got off to a flying start and won us some important games at that time of the year and carried on through there," Carrick said.

"For us as players to see that, obviously with the goals flying in, was great and throughout the season the impact he made was amazing for a first season at this club."

Carrick added that United under Moyes would have to be better next season to see off the threat of Manchester City and Chelsea among five or six title challengers.

"With us and City and Chelsea changing managers there's a bit of a different feel about it but they all have got strong squads. The best teams come to the top and hopefully we'll be up there," he said.

"But it'll be tough as there's probably five or six teams now that fancy their chances of the title, or certainly the top two or three, so we'll have to be as good if not better than ever."

Comments
Topics mentioned in this article
Football Liverpool Manchester City Chelsea Manchester United Arsenal Michael Carrick Wayne Rooney Mark Hughes Alex Ferguson English Premier League
Get the latest updates on IPL 2020, check out the IPL Schedule for 2020 and Indian Premier League (IPL) Cricket live score . Like us on Facebook or follow us on Twitter for more sports updates. You can also download the NDTV Cricket app for Android or iOS.