Moyes will take over from United manager Alex Ferguson at the end of the season and was given an emotional send-off by Everton supporters on Sunday. 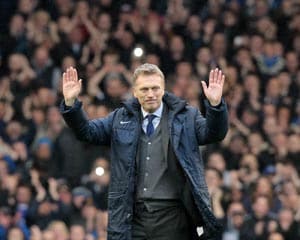 Everton manager David Moyes admits his side's 2-0 victory over West Ham was the perfect way to say farewell to Goodison Park before his impending move to Manchester United.

Moyes will take over from United manager Alex Ferguson at the end of the season and was given an emotional send-off by Everton supporters on Sunday.

Belgium international Kevin Mirallas scored both goals in a victory which ensures Everton will finish the season above city rivals Liverpool in consecutive top-flight seasons for the first time since 1937.

And even though Everton should have won by more than a two-goal margin, Moyes was happy that his last game on home turf ended on a winning note.

The Scot, who was confirmed as Ferguson's successor on Thursday, was given a guard of honour onto the pitch and supporters sung his name throughout the match in appreciation of his achievements during 11 years with the Toffees.

"It was a perfect finish," said Moyes, whose final game as Everton boss will be against Chelsea at Stamford Bridge next Sunday.

"More important for me was how well Everton played. I thought we played like a top team not one in fifth or sixth. We'd have been a match for any side on that performance.

"It was a really emotional occasion. All the stewards were standing clapping me when I came in, and I didn't know what to do.

"I came here 11 years ago from Preston and when I walked out on the pitch the first time back then a lot of people probably didn't know who I was.

"The chairman took a big gamble. Giving a young British manager an opportunity to work. He needs a lot of credit for that.

"I'm really fortunate to get the reception I got. I am gobsmacked and thankful and humble for what the people of Everton have shown me."

Despite the victory, Everton will not be in European competition next season as they can't catch fifth-placed Arsenal, who hold the Europa League berth at present.

But Moyes is proud his players were in the hunt for this long.

"The team have been great," he added.

"For us to finish where we are on a limited budget with less resources than many other clubs, and up until two weeks ago still with a chance of Champions League qualification.

"Look at the runs of Tottenham, Arsenal and Chelsea. It's only their runs that have meant we haven't been able to get a bit closer to it.

"We haven't done badly ourselves. We qualified for the Champions League with fewer points than what we have got now. I'm really proud of my players."

Meanwhile, West Ham manager Sam Allardyce admitted his team were completely outclassed by Everton, although he believes the fact it was Moyes' last game at Goodison played a part.

"The way we played I think we were lucky to get away with a 2-0," Allardyce said.

"There was only one player who was outstanding and that was Jussi Jaaskelainen. He made some absolutely outstanding saves.

"I warned the players before the game what it was going to be like and it was exactly that.

"We simply couldn't cope with it. The occasion made it even more difficult.

"We saw that not just with the performance of the Everton players on the ball, we saw it with the way they were when they didn't have it."

And Allardyce conceded West Ham will need a few more recruits if they are to be able to match the likes of Everton in the Premier League next season.

"The next challenge is new players," Allardyce added.

"We have got to get better and find more talent, we have to make the squad bigger and better in terms of the players we have."