Danny Welbeck will get his chance, says Sir Alex Ferguson

Manchester United coach Alex Ferguson has told Danny Welbeck that he will get a chance to make a goal-scoring contribution to the club's season. 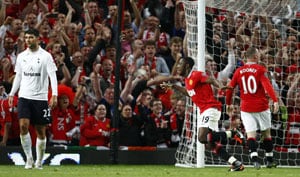 Manchester United coach Alex Ferguson has told Danny Welbeck that he will get a chance to make a goal-scoring contribution to the club's season.

Welbeck took his tally to five goals in 14 appearances for England in the 4-2 friendly defeat away to Sweden on Wednesday.

But the 21-year-old has found appearances hard to come by at Old Trafford since the arrival of Dutch striker Robin van Persie from Arsenal in August in a £24 million ($38.1 million, 29.9 million euro) deal.

Welbeck has started just five league games, mainly wide on the left, as Ferguson has opted for experience in attack.

It is a ploy that has served United well this season, with van Persie scoring eight times in 11 league appearances to help United establish a two-point lead in the Premier League table.

But ahead of the match at Norwich City on Saturday, Ferguson promised that Welbeck will get his chance to help United win silverware this season.

"It's difficult for me (to leave Welbeck out)," Ferguson told a news conference in Manchester on Friday.

"Robin van Persie has come in, we've got Wayne Rooney. You tend to rely on the experience of these players.

"What we've got to try and do is alternate selections so that Danny feels he is making a contribution. At the moment, we're tending to play him wide left, which I think he is capable of playing.

"He can still provide a certain type of threat from that position and he's done that many times over the years. But I think he's a natural centre-forward and he will get opportunities.

"He has shown with his form for England that he can be a real asset to us through the middle. He's a good goal threat."

United are not short of goals -- they have plundered 44 in 17 league and cup games this season -- but it is at the other of the pitch that Ferguson has worries.

His side have managed just two clean sheets in 11 league games and last Saturday allowed struggling Aston Villa to establish a two-goal lead before hitting back to win a dramatic game at Villa Park 3-2.

"It's frustrating," added Ferguson. "We don't expect them to be behind by two goals. It's not that we under-estimate anyone -- we just don't expect a Manchester United team to be two goals behind.

"You have to go into games believing you are going to be two goals ahead rather than two goals behind but it's happened a few times this season.

"We were two goals behind against Tottenham (in a 3-2 league defeat in September) and I thought we were unlucky not to get back.

"It won't happen all the time. You can't take it for granted that you can come back from two goals behind.

"This is the area where we're hopefully going to improve but we've got to defend better."

Rooney is a doubt for Saturday's match with an ankle injury but van Persie should be fit.

The striking duo both pulled out of mid-week internationals for England and the Netherlands respectively, but it does not seem the damage is too bad in either case.

Defender Phil Jones, who has been recovering from a serious knee injury, has returned to training and could feature in next Tuesday's Champions League game away to Galatasaray.