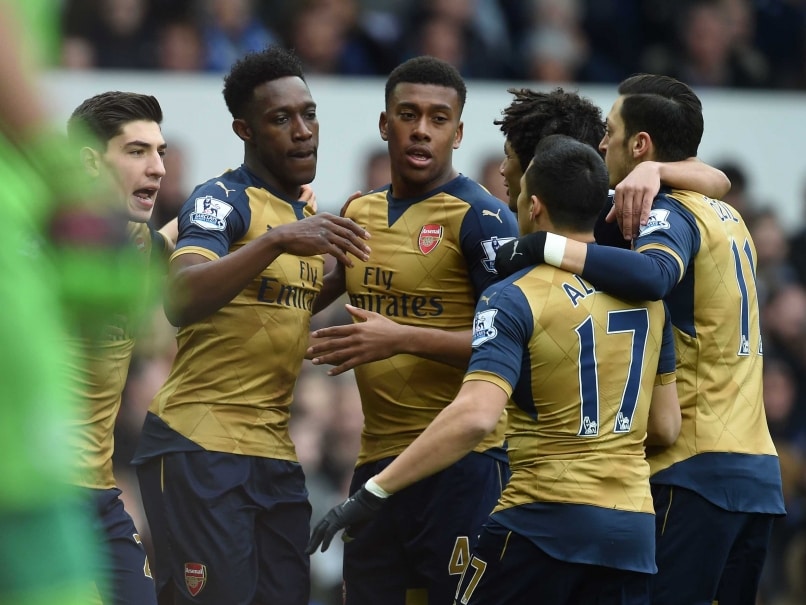 Alex Iwobi scored his first Arsenal goal as Arsene Wenger's side won 2-0 at Everton on Saturday to keep alive their outside chance of winning the Premier League title. (Click here for latest Football stories)

Arsenal won for only the second time in nine games and the first time in four attempts in the league as they moved to within eight points of Leicester City before the leaders' game at Crystal Palace.

After a difficult week in which they had gone out of the FA Cup to Watford and the Champions League to Barcelona, prompting some supporters to call for Wenger to go, the Gunners gave the perfect response.

Having lost only once to Everton in their previous 17 league meetings, Arsenal could hardly have picked better opponents against whom to try and launch a late-season rally.

They seized the opportunity in impressive style thanks to an early Danny Welbeck goal and Iwobi's cool finish, which gave the 19-year-old Nigeria international a goal on his first Premier League start.

Everton should have been on a high from their FA Cup quarter-final win over Chelsea last weekend and started brightly, with Seamus Coleman poking a shot against the outside of the post from a James McCarthy corner.

But within a minute Arsenal had done likewise at the other end as an attempted clearance from Muhamed Besic cannoned off Welbeck and thudded against the woodwork.

That set the tone for a sustained spell of Arsenal attacking either side of the opening goal from Welbeck, which came with seven minutes on the clock.

It was classic Arsenal as Alexis Sanchez played a neat one-two with Mesut Ozil before slipping the ball through for Welbeck to round Joel Robles and roll home his fourth goal of an injury-hit season.

Everton's back line struggled to cope with the movement and passing of the visitors, who had chances to double their lead through Iwobi, the nephew of former Nigeria international Jay-Jay Okacha, and the lively Ozil.

The Merseysiders, who have struggled at home all season with just four league wins at Goodison, were fortunate not to concede a penalty 11 minutes before the break as Besic and Ramiro Funes Mori both clipped Sanchez without winning the ball.

But they still went into half-time 2-0 down thanks to the brilliance of Iwobi.

The academy graduate showed great pace and composure to sprint onto Hector Bellerin's ball over the top before sliding the ball under Robles, justifying his inclusion ahead of Theo Walcott and Olivier Giroud.

Everton manager Roberto Martinez sent on England international defender John Stones at the start of the second half in a re-shuffled formation, but it did little to stem the tide as Arsenal continued to dominate.

Stones got away with a mistake by robbing Welbeck at the last minute, but despite living dangerously throughout, the worst home defence in the Premier League did not concede again.

Everton almost pulled a goal back through a Phil Jagielka header and a fierce Tom Cleverley shot, which was blocked by Gabriel.

Comments
Topics mentioned in this article
Danny Welbeck English Premier League Arsenal Football
Get the latest updates on ICC T20 Worldcup 2022 and CWG 2022 check out the Schedule, Live Score and Medals Tally. Like us on Facebook or follow us on Twitter for more sports updates. You can also download the NDTV Cricket app for Android or iOS.