Christian Benteke struck in the 26th minute at Anfield on Monday, prodding home a cross from Jordan Henderson in front of the Kop, and the goal stood despite Philippe Coutinho appearing to have been offside. 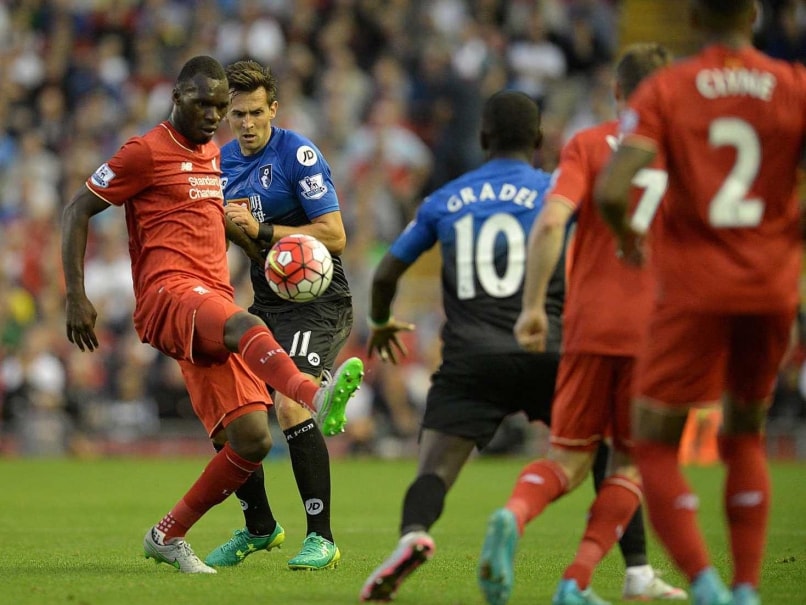 Christian Benteke in action vs Bournemouth in the English Premier League.© AFP
Liverpool:

Benteke struck in the 26th minute at Anfield on Monday, prodding home a cross from Jordan Henderson in front of the Kop, and the goal stood despite Philippe Coutinho appearing to have been offside.

Liverpool have adopted a more direct approach now that Benteke is in the team and Rodgers is hopeful that the £32.5 million ($50.8 million, 45.8 million euros) Belgium international's muscularity and awareness will help solve the chronic goal-scoring problems that plagued his team last season.

"I thought he was a real handful tonight (Monday)," said Rodgers. "I think you've seen all the facets of his game. His hold-up play is outstanding and he's got a wonderful touch for a big guy.

"He can help the ball on into areas, he can take the ball in, control the game, switch the game. His touch is good. You see him linking and combining.

"There was one moment when the ball came into the box, which was one of the reasons we looked to bring him in.

"Because of his strength and power, he tried to make contact with it, and we had a chance with Coutinho to then shoot. In my time here, that's never really happened.

"The ball's come in and maybe been cleared out, but because of his physicality and his contact, he keeps the ball alive in a dangerous area of the field.

"And that will really help. Once the players get used to seeing that and working with that, that will offer us more opportunities to score goals. So it gives us a different dimension to our game."

Victory built on Liverpool's 1-0 win at Stoke City and left them level on points with Manchester City, Leicester City and Manchester United at the top of the early-season standings.

But it came at the cost of an injury to new captain Henderson, who departed early in the second half with a foot problem.

As well as Benteke's goal, Bournemouth were also aggrieved that captain Tommy Elphick had seen an early header ruled out for a foul after he was adjudged to have clambered over Dejan Lovren.

Arriving at his post-match press conference, Bournemouth manager Eddie Howe was asked for his thoughts on the goal and shot back: "Which one?"

He added: "It's hugely frustrating really, especially after the goal being disallowed, so that's basically a two-goal swing against us."

Howe was particularly disappointed that Benteke's goal had been allowed to stand despite Coutinho's attempt to make contact with Henderson's in-swinging cross from the left.

New guidelines by rule-making body the International Football Association Board explicitly state that in such instances, the player who attempts to play the ball should be flagged offside and Howe's exasperation was plain.

"The problem for us as managers was that we felt it (the offside rule) was a little bit grey," he said.

"We were assured that it wouldn't be and that the rule would be adhered to correctly. The problem tonight is that if that's not offside, that's the clearest example that you'll see of the new rule.

"It's a yard and a bit offside and he (Coutinho) has clearly impacted on the goalkeeper. I don't think it's a tough one.

Howe nonetheless took heart from the courage shown by his players and said that the performance would give his side "confidence that we can succeed at this level".

Liverpool never recovered from losing three of their first five games last season, but despite his team's steady start, Rodgers was unwilling to look too far ahead.

"Last season it was October before we got back-to-back wins," he said.

"To get that in the first two games is pleasing, but we still have a lot of work to do."

Comments
Topics mentioned in this article
Christian Benteke Liverpool English Premier League Football
Get the latest updates on SA vs IND 2021-22, check out the Schedule and Live Score . Like us on Facebook or follow us on Twitter for more sports updates. You can also download the NDTV Cricket app for Android or iOS.