Maurizio Sarri's Chelsea have more wins at this stage of the season than Manchester City did in Pep Guardiola's first season at the Etihad Stadium. 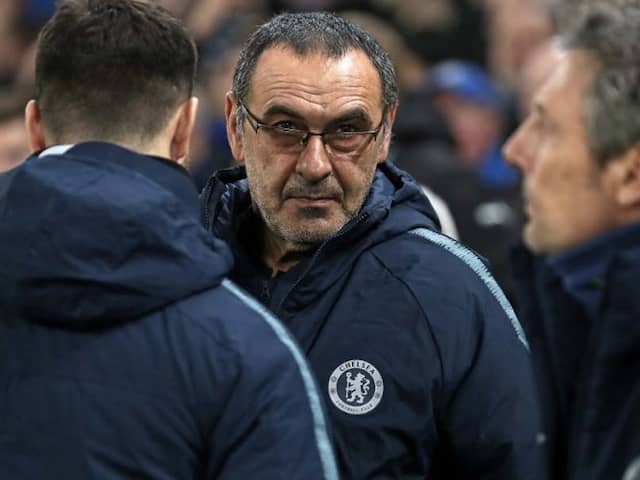 Maurizio Sarri is clinging to his job.© AFP

Maurizio Sarri says he cannot understand why his position as Chelsea boss is under threat when he considers Pep Guardiola's first season at Manchester City. The 60-year-old Italian is clinging to his job, seven months since his appointment, after Chelsea's humiliating 6-0 defeat at City, leaving them outside the Champions League qualification places. Yet Sarri's Chelsea have more wins at this stage of the season than City did in Guardiola's first season at the Etihad Stadium in 2015/16.

Guardiola had a history of success at Barcelona and Bayern Munich and was given time and funds to overhaul City, who will be bidding to win a second successive League Cup against Chelsea at Wembley on Sunday.

History suggests Sarri is not likely to receive the same leeway but he also pointed to the praise given to Arsenal boss Unai Emery in the Spaniard's first season in the Premier League.

Sarri, who is seeking the first trophy of his management career, said: "We are in the first final of the season. We are one point from the top four, the same points as Arsenal, and (people say) Arsenal are doing well.

"We are doing a little bit better because we are in a final, and yet our season is a disaster. I don't understand.

"I want you to remember that, last season, this team gained 70 points, not 100. Then, in the summer, we changed everything. So there is another problem to solve. So it is not easy."

Tottenham visit Stamford Bridge in the Premier League on Wednesday in a big week for Chelsea, with Sarri acknowledging the basic facts.

He said: "In my job, I need the result. Nothing else."

Guardiola's style of play took time to implement and he had an expensively assembled squad to work with.

Sarri clearly feels he should be given the same time, although Chelsea owner Roman Abramovich is not renowned for his patience and the transfer ban imposed by FIFA on Friday could have a major impact.

Chelsea were unbeaten for the first 18 competitive games of Sarri's spell as head coach until Spurs inflicted a first defeat.

Since then, Chelsea have been inconsistent, with high points including a 2-0 win against City at home and a League Cup semi-final success over Spurs, but Blues fans targeted Sarri in Monday's FA Cup loss at home to Manchester United.

Sarri says the two results against City, on December 8 and February 10 are not a true reflection of his Chelsea side.

He said: "The truth is in the middle. It's really very important for us to stay in the match for a very long time. Then we will be able to do something."

During the United loss, Chelsea fans delivered an expletive-laden critique of 'Sarri-ball', the possession-based style the Italian favours. But he does not recognise the moniker.

He added: "As I said in England on the first day, I don't know what Sarri-ball is."