Chelsea, in fourth place, are now five points clear of fifth-placed Wolves and with nine matches to play they are in pole position to qualify for the Champions League. 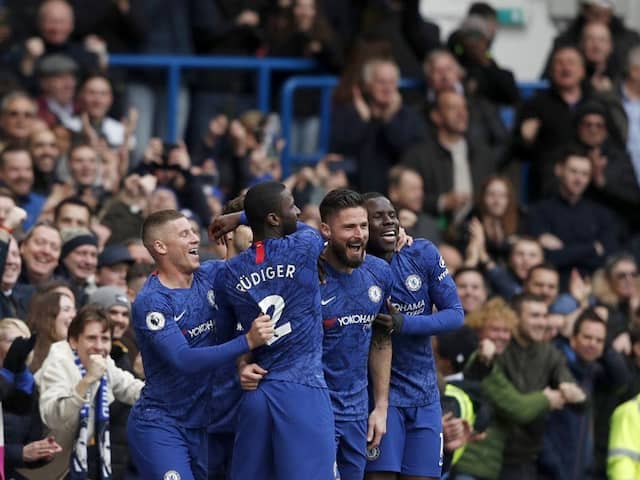 Chelsea powered to their biggest Premier League win of the season.© AFP

Chelsea powered to their biggest Premier League win of the season and cemented their place in the top four as Mason Mount and Pedro inspired a 4-0 demolition of Everton on Sunday. Frank Lampard's side won for just the second time in seven league games thanks to goals from Mount, Pedro, Willian and Olivier Giroud in a masterful display at Stamford Bridge.

Chelsea, in fourth place, are now five points clear of fifth-placed Wolves and with nine matches to play they are in pole position to qualify for the Champions League.

It was an vibrant end to a much-needed week of good news for Lampard, whose side knocked out Liverpool out in the FA Cup fifth round on Tuesday.

Rocked by a Champions League last 16 hammering by Bayern Munich and a series of spluttering domestic results, Chelsea were in danger of losing the feelgood factor created by Lampard's blooding of so many promising youngsters in his first season.

But, despite absences including Tammy Abraham, N'Golo Kante and Mateo Kovacic, this was exactly the kind of energetic, clinical performance Lampard has urged his team to produce.

Mount and Pedro were livewires in the final third, while 18-year-old Billy Gilmour impressed on his first Premier League start.

Everton's hopes of reaching the Champions League are fading fast after three games without a victory.

Their boss Carlo Ancelotti was back at Chelsea as a manager for the first time since being sacked in 2011.

Ancelotti won the Premier League and FA Cup with Chelsea in 2010 and was favourite of Lampard during his two-year reign.

But Lampard had already beaten one old mentor in Jose Mourinho this season and Chelsea were quickly on top against another of his teachers.

Giroud headed onto Willian and his cross picked out the run of Mount, whose agile half-volley forced a fine save from Jordan Pickford.

Chelsea were sharper than Everton in all areas and took the lead in the 14th minute with a flowing 20-pass move.

Gilmour, so composed again after shining against Liverpool, quickened the tempo as he fed Mount, who worked the ball wide for the overlapping Pedro.

Pedro picked out Mount's astute run to the edge of the Everton area and the 21-year-old midfielder turned away from Tom Davies to drill a fine low strike past Pickford for his first goal since December.

Having delivered his first Premier League assist of the season, Pedro was in the groove and he bagged his first top-flight goal since February 2019 in the 21st minute.

Once again Chelsea moved with pace and precision.

Gilmour and Giroud teed up Ross Barkley for a defence-splitting pass that set Pedro clear and the Spanish winger kept his cool to slot past Pickford.

Barkley enjoyed the goal almost as much as Pedro as the former Everton star silenced the jeers from his old fans.

Dominic Calvert-Lewin was given a new contract this week after scoring eight times under Ancelotti, but the Everton striker poked tamely wide from Richarlison's pass.

Pickford kept out Giroud's long-range blast, but Chelsea were in complete control and Willian, who shook off an Achilles problem to start, put the result beyond doubt in the 51st minute.

Pedro and Barkley exchanged passes to find Willian, who took advantage of the space left by Everton's sluggish defence as the Brazilian fired home from 20 yards.

Giroud added to Everton's misery three minutes later when he escaped Mason Holgate's slack marking to turn in Willian's cross for his third goal of the season.

Everton English Premier League Football
Get the latest Cricket news, check out the India cricket schedule, Cricket live score . Like us on Facebook or follow us on Twitter for more sports updates. You can also download the NDTV Cricket app for Android or iOS.