Timo Werner fired Chelsea to the top of the Premier League as the German's late goal inspired a controversy-filled 3-1 win against 10-man Southampton. 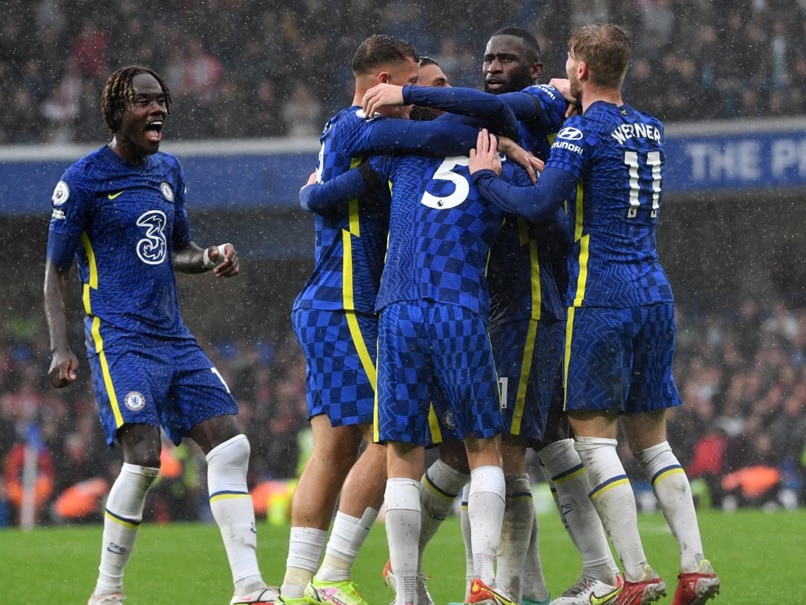 Chelsea scored two late goals to clinch a 3-1 win over Southampton in the Premier League.© AFP

Timo Werner fired Chelsea to the top of the Premier League as the German's late goal inspired a controversy-filled 3-1 win against 10-man Southampton on Saturday. Thomas Tuchel's side ended a frustrating week on a high note thanks to Werner's contribution to a dramatic finale at Stamford Bridge. After successive 1-0 defeats against Manchester City and Juventus, the Blues were in danger of another disappointing result with just minutes remaining in rain-soaked west London. Trevoh Chalobah's early opener for Chelsea had been cancelled out by a James Ward-Prowse penalty in the second half.

But Ward-Prowse was sent off for an ugly lunge on Jorginho and Chelsea took full advantage as Werner restored their lead with six minutes left before Ben Chilwell wrapped up the points.

Failure to defeat a Southampton side still seeking their first league win this season would have raised serious questions about the European champions.

So it was a huge relief for Tuchel to get back on track heading into the international break as Chelsea put one of their rare blips of the German's reign behind them.

"After two defeats we had to be careful that we didn't start being too sad or too worried," Tuchel said.

"It was important to have a better performance than the last two games, that we sharpened our mindset so that we are not afraid to lose.

"It was nice to play the way we did and get a deserved win."

Frustrated by what he labelled a "strange display" against Juventus on Wednesday and an equally lacklustre loss to City last weekend, Tuchel made five changes in a bid to shake up his "tired" team.

For a man who has hardly put a foot wrong since taking charge in January, Tuchel showed he had not lost his Midas touch as three of the players he brought into the team combined for the ninth-minute opener.

Ruben Loftus-Cheek towered above the Southampton defence to flick Chilwell's corner to the far post, where Chalobah dived to head home from close range.

Werner thought he had doubled Chelsea's lead just before half-time when he rose above two defenders to head in from Callum Hudson-Odoi's cross.

But, with both teams back in position to kick off, a late VAR intervention convinced referee Martin Atkinson to rule that Cesar Azpilicueta had clipped Kyle Walker-Peters' heel much earlier in the build-up to the goal.

It was a debatable decision and Tuchel was incandescent with rage, waving his arms in protest as he briefly marched into the pitch -- an incursion that earned a booking as boos cascaded down from the stands.

"I was very angry because I could never believe this could happen in the Premier League. It was a 50-50 that wasn't even in close connection to the goal," Tuchel said.

"I understood before the season that we didn't want soft fouls, that we wanted a contact game."

Shaken by that controversial moment, Chelsea lost their grip and Southampton equalised in the 61st minute.

Teenage right-back Tino Livramento, who left Chelsea in the close-season, made an incisive raid that forced a panicked foul from Chilwell in the penalty area.

Atkinson pointed to the spot and Ward-Prowse stepped up to send Edouard Mendy the wrong way with the penalty.

But Ward-Prowse could have no complaints when Atkinson sent him off for nasty foul that left Jorginho writhing in pain with 14 minutes left.

That proved the turning point and Chelsea went in front in the 84th minute.

Ross Barkley sprayed a fine pass out to Azpilicueta and his half-volleyed cross was perfect for Werner to drill home from close-range.

Five minutes later, Lukaku and Azpilicueta hit the post in quick succession before Chilwell steered in the rebound.

Southampton Timo Werner Football
Get the latest updates on ICC Women's Cricket World Cup 2022 and IPL 2022, check out the Schedule , Live Score and IPL Points Table. Like us on Facebook or follow us on Twitter for more sports updates. You can also download the NDTV Cricket app for Android or iOS.