Chelsea and Manchester United secured comfortable wins in the race for the Premier League top four. 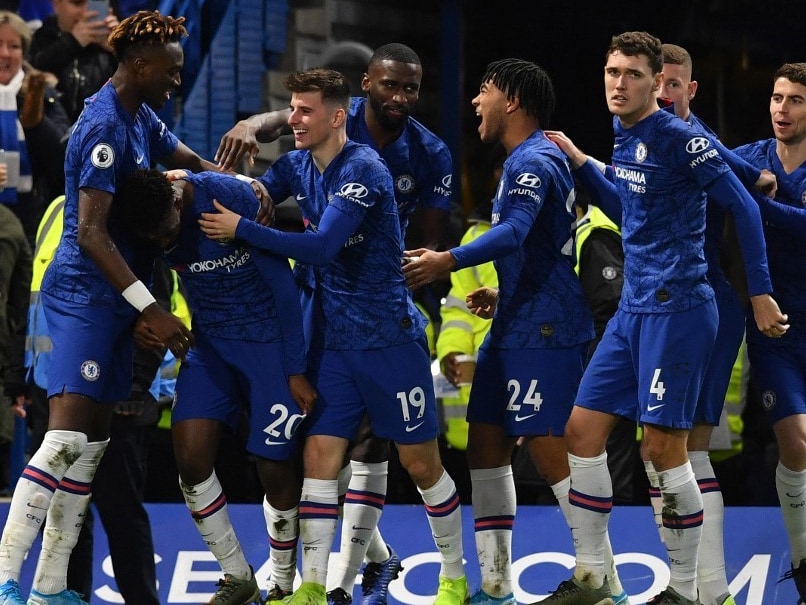 Chelsea put their struggles at Stamford Bridge behind them with a 3-0 win over Burnley.© AFP

Southampton gained sweet revenge for their 9-0 humbling by Leicester on Saturday, beating the Foxes 2-1 while Chelsea and Manchester United secured comfortable wins in the race for the Premier League top four. Ten-man Arsenal fell further off the pace after a 1-1 draw at Crystal Palace while Carlo Ancelotti's Everton pulled level on points with the Gunners after a third win in four league games. Southampton claimed their fifth win in their past six games in all competitions as they came from behind at the King Power Stadium against the side second in the table. Dennis Praet fired the hosts into an early lead, but Stuart Armstrong's deflected effort quickly pulled Ralph Hasenhuettl's men level.

Danny Ings then scored his 10th goal in 11 games eight minutes from time and the visitors survived a late scare when Jonny Evans's header was ruled out by VAR for offside.

Liverpool can now extend their lead at the top to 16 points when they travel to Tottenham later on Saturday.

"Fantastic game today from both sides," Hasenhuettl, who took responsibility for the 9-0 drubbing at the hands of Leicester in October, told the BBC.

"A good feeling every second of this game that we could win here. It was maybe the best away performance from us this season."

Chelsea put their struggles at Stamford Bridge behind them with a 3-0 win over Burnley, who slid ever closer to the bottom three.

Callum Hudson-Odoi then scored his first Premier League goal by converting Cesar Azpilicueta's cross at the back post.

"It's a very convincing win," said Lampard. "I thought there were some great passages of play throughout the game but the overall performance was superb.

"We played with a really positive attitude -- particularly Ross (Barkley) and Callum (Hudson-Odoi). We have set a standard today and we know we haven't reached that recently."

United ended a three-game winless run in style with Marcus Rashford and Anthony Martial once again leading the way for Ole Gunnar Solskjaer's men in a 4-0 demolition of bottom-of-the-table Norwich.

Rashford marked his 200th appearance for the club with a brace.

The England international opened the scoring in the 27th minute and doubled United's lead from the penalty spot before Anthony Martial and substitute Mason Greenwood completed the rout.

"Very happy," said Solskjaer. "We started on the front foot. When you can walk off, and I am sure the opposition are talking about Man Utd as a very hard-working team, that is what I want from my team.

"In any Premier League game you have to take advantage of the pressure and domination you get."

Arsenal are now 11 points off the Champions League places as their revival under Mikel Arteta was halted by a red card for captain Pierre-Emerick Aubameyang in a 1-1 draw at Crystal Palace.

Aubameyang finished off a flowing move including Mesut Ozil and Alexandre Lacazette to give the Gunners a deserved first-half lead.

However, the Eagles levelled thanks to Jordan Ayew's deflected effort before a VAR review turned a yellow card for Aubameyang into a red for a reckless challenge on Max Meyer.

Wolves' bid for a return to European football next season is also faltering as they were held 1-1 at home by Newcastle.

Both goals came inside the first quarter of an hour as Miguel Almiron fired the Magpies in front before Leander Dendoncker levelled for Wolves.

Everton bounced back from an embarrassing FA Cup exit to a much-changed and youthful Liverpool side last weekend thanks to a moment of magic from Richarlison to beat Brighton 1-0.

Southampton English Premier League Football
Get the latest updates on Fifa Worldcup 2022 and check out  Fifa World Cup Schedule, Stats and Live Cricket Score. Like us on Facebook or follow us on Twitter for more sports updates. You can also download the NDTV Cricket app for Android or iOS.