Van Ginkel was replaced by Ramires, who in the 35th minute added to Fernando Torres's opening goal. But Ramires too also failed to complete the match, going off at half-time. 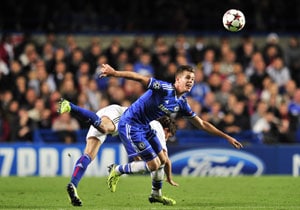 Chelsea were left counting the cost of their League Cup win away to Swindon after injuries to Marco van Ginkel and Ramires marred Tuesday's 2-0 victory.

Despite trying to play on, van Ginkel then went off in the 10th minute at League One Swindon's County Ground.

Van Ginkel was replaced by Ramires, who in the 35th minute added to Fernando Torres's opening goal.

But Ramires too also failed to complete the match, going off at half-time.

However, it was van Ginkel's injury which was of greatest concern to the Premier League side.

"We've got an injury to Marco which, it's a little bit too early to be certain but it doesn't look good," said Chelsea assistant first-team coach Steve Holland.

"He'll have a scan on Wednesday on an injury to his knee. It's too early to say (if it's a bad one) but let's hope that's not the case. It didn't look good as he came off so early in the game. We'll have to see the results of the scan, we'll know more on Wednesday.

"And his substitute, Ramires, also had to go off with a muscular injury at the top of his hip which was causing him more discomfort as he tried to run it off.

"They're the two disappointments of the evening."

Comments
Topics mentioned in this article
Football Chelsea Manchester City Ramires Alex Ferguson Marco Van Ginkel Mark Hughes English Premier League
Get the latest updates on SA vs IND 2021-22, check out the Schedule and Live Score . Like us on Facebook or follow us on Twitter for more sports updates. You can also download the NDTV Cricket app for Android or iOS.