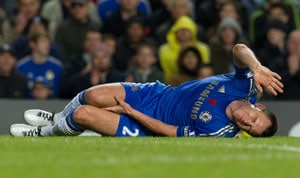 The ligament damage in the defender's right knee was not as bad as first feared after Liverpool's Luis Suarez landed awkwardly on him during a 1-1 draw in the English Premier League on Sunday.

Chelsea announced at the start of the week that Terry would be out for "weeks not months."

Now Di Matteo says Terry will be out for "approximately three weeks."

Comments
Topics mentioned in this article
Football John Terry Chelsea Manchester City Alex Ferguson Mark Hughes English Premier League
Get the latest Cricket news, check out the India cricket schedule, Cricket live score . Like us on Facebook or follow us on Twitter for more sports updates. You can also download the NDTV Cricket app for Android or iOS.