After the panic caused by consecutive defeats following the coronavirus hiatus, Arsenal manager Mikel Arteta has steadied the ship impressively. 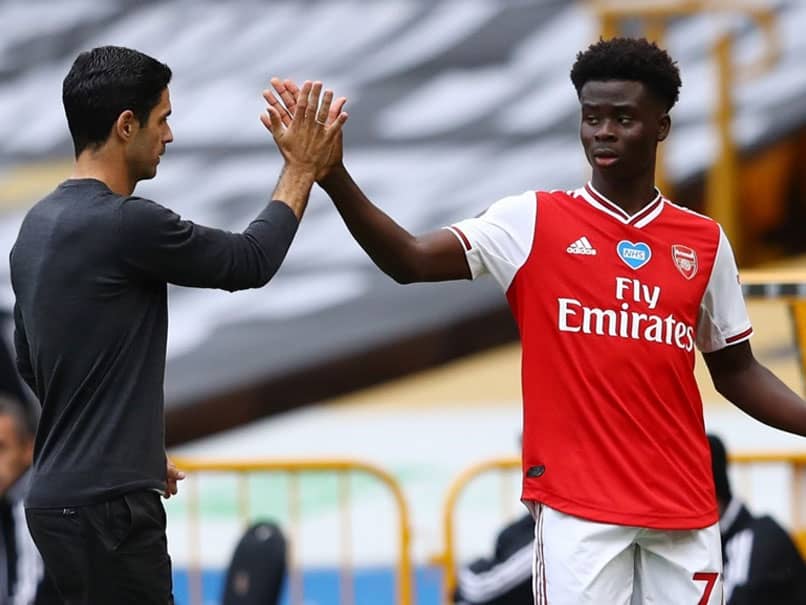 Mikel Arteta knows Arsenal must make a flawless finish to the season after a 2-0 win against Wolves gave them renewed hope of qualifying for the Champions League. Arteta's side made it three successive league victories thanks to Bukayo Saka's first half strike and a late Alexandre Lacazette goal at Molineux. Arsenal are now six points behind fifth-placed Manchester United with five games left. The Gunners remain a long shot to reach next season's Champions League, but if second placed Manchester City's continental ban is upheld, a fifth place finish would secure a place in Europe's elite club competition.

"Every game you have no margin for error, we know that we try to win every game," Arteta said.

"Let's enjoy it a little bit before we start thinking about Leicester and try to go again. We try to improve as a team.

"It's probably one of the best wins because of the difficult schedule we've had and how well they have been doing all season.

"Winning is not an easy thing to do and it's another step forward in our process and I'm really happy."

Just days after Saka signed a new long-term contract with the club, the 18-year-old underlined the potential of Arsenal's emerging crop of academy graduates.

After the panic caused by consecutive defeats following the coronavirus hiatus, Arteta has steadied the ship impressively.

Wolves' hopes of qualifying for the Champions League were hit by their first defeat in four games since the restart and they now sit three points behind Manchester United.

"We have to focus on ourselves. We never look at the table. What drives us is our performance," Wolves boss Nuno Espirito Santo said.

"We didn't perform so well and that's what guides our approach. The rest is something we cannot control."

Once again there was no place in the Arsenal squad for out of favour midfielder Mesut Ozil or Matteo Guendouzi, while Nicolas Pepe was absent after his wife went into labour.

Pierre-Emerick Aubameyang had Arsenal's first sight of goal when he stabbed straight at Wolves keeper Rui Patricio from a Dani Ceballos corner.

Adama Traore carried the main threat for Wolves and the winger teased Kieran Tierney and Sead Kolasinac before crossing just too high for Leander Dendoncker.

David Luiz halted another menacing raid by cynically chopping Traore down to earn a booking.

Arsenal's youngsters were growing into the game and Eddie Nketiah almost caught Rui Patricio off guard with a long-range shot that the keeper turned onto the post with his foot.

The visitors took the lead two minutes before half-time when Willy Boly misjudged the bounce and Aubameyang touched it on to Tierney.

Tierney's deflected cross reached Saka and he hooked a fine finish past Rui Patricio from 12 yards.

Saka's fourth goal of the season in all competitions was the first Wolves had conceded in 448 minutes stretching back to their win at Tottenham on March 1.

Wolves striker Raul Jimenez appealed in vain for a penalty when Cedric Soares made contact with him as they challenge for Traore's cross.

The introduction of substitute Diogo Jota lifted Wolves and the midfielder had a goalbound shot blocked by Luiz.

Traore should have done better than chip tamely wide from Jota's defence-splitting pass, while Pedro Neto's effort was too close to Emiliano Martinez.

Lacazette came off the bench to wrap up the points three minutes after his introduction.

The French forward took Joe Willock's pass and drove a clinical strike past Rui Patricio in the 86th minute.

Wolverhampton Pierre-Emerick Aubameyang English Premier League Mikel Arteta Football
Get the latest updates on IPL 2020, check out the IPL Schedule for 2020 and Indian Premier League (IPL) Cricket live score . Like us on Facebook or follow us on Twitter for more sports updates. You can also download the NDTV Cricket app for Android or iOS.