Luis Suarez will have only two years left in his contract when this season ends and wanted to leave Anfield in pre-season in a bid to get Champions League football only for Liverpool to reject two bids from Arsenal. 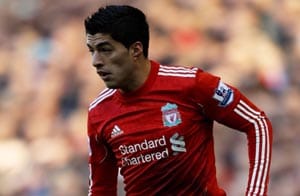 Brendan Rodgers does not believe Liverpool need to finish in the top four of the Premier League to ensure Luis Suarez remains at the club.

Suarez netted four sublime goals on Wednesday to help Liverpool easily dispatch Norwich 5-1 and they are now preparing to welcome West Ham to Anfield on Saturday knowing they have a world-class player brimming with confidence. (Luis Suarez: World soccer's next wonder boy?)

Uruguay forward Suarez will have only two years left in his contract when this season ends and wanted to leave Anfield in pre-season in a bid to get Champions League football only for Liverpool to reject two bids from Arsenal.

Liverpool sit fourth in the Premier League heading into this weekend's fixtures and their early-season form has many believing they can remain in the battle to reach the Champions League.

But Rodgers insists it will not be pivotal in keeping their star man, who has scored 13 Premier League goals so far despite missing five games through suspension, at the club despite the striker's pre-season pleas.

"Luis is extremely happy here at Liverpool," Rodgers said. "We don't want to regurgitate everything from the past. That was a difficult summer for everyone. We stood firm as a club.

He understood where we were at. Our thinking was to keep our best players.

"Hopefully, he certainly feels he is vindicated for staying. This is the perfect club for him, the whole profile suits Luis down to the ground and hopefully in the coming years he can achieve everything he wants to achieve, which is to play at the top level of the game. His talent deserves that and this is a club that deserves that."

The Reds will be looking for their fifth straight home win on Saturday as Stewart Downing returns to Anfield for the first time since his £5 million pre-season move to West Ham in the summer.

"West Ham will be a difficult team to play against, they have talented players like Stewart Downing," Rodgers added.

"We just need to finish the week on a high and get to 30 points that has been the aim. Thus far at home in 2013, we have been exceptional."

The relief that followed the home victory over fellow strugglers Fulham last weekend quickly disappeared when Sam Allardyce's West Ham side lost at Crystal Palace, allowing the Selhurst Park club to move off the foot of the table.

After experiencing such disappointment, a visit to face an in-form Suarez is that last thing West Ham need but centre back James Tomkins insists his side will travel to Anfield without fear.

"Everybody definitely wants to play against the top players and it's no different for myself," said Tomkins.

"That's how you test yourself, by playing against world-class players, and that's what Liverpool have got.

"We know we have got a good away result this season at Spurs, so we know it can happen against a team like Liverpool.

"They are doing well, but they are certainly a team we can beat on our day, don't get me wrong. We're going to stay positive for the weekend."

The return of striker Andy Carroll to training at the club after three months rehabilitation in Belgium and the Netherlands has provided a timely boost.

Former Liverpool forward Carroll is still some way short of a return to action but he said: "It has been a long, hard process but now I can see the light at the end of the tunnel.

"It felt great to be out on the pitch jogging and kicking a ball in the open air, even if it was a bit cold!"

Comments
Topics mentioned in this article
Football Arsenal Manchester City Liverpool Luis Suarez Alex Ferguson Mark Hughes English Premier League
Get the latest updates on ICC T20 Worldcup 2022 and CWG 2022 check out the Schedule, Live Score and Medals Tally. Like us on Facebook or follow us on Twitter for more sports updates. You can also download the NDTV Cricket app for Android or iOS.