The Football Association's punishment of Suarez prompted media speculation that the Uruguayan could be tempted to leave England, but Rodgers said the club would work to keep him in the right frame of mind in preparation for his eventual return to action next season. 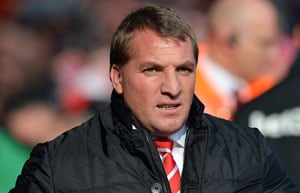 Liverpool manager Brendan Rodgers heralded his side for drawing a line beneath the Luis Suarez biting affair with an emphatic 6-0 rout of Newcastle United in the Premier League.

In their first game since Suarez was given a 10-match ban for biting Chelsea's Branislav Ivanovic, Liverpool destroyed Newcastle at St James' Park on Saturday to record their most handsome league win since a 6-0 rout of Derby County in September 2007.

Suarez's antics had placed the club under sustained scrutiny in the build-up to the game and Rodgers praised his players for reacting in such scintillating fashion.

"It's been a very, very difficult week," he told ESPN. "It was a real test for us all and I think you've seen the concentration and the focus today. We were also backed by some wonderful support.

"We do things collectively. Luis has been brilliant for us this season but we can only move forward with the players we have and they were outstanding today. It's just about finishing the season as strong as we can and going into next season with good momentum."

The Football Association's punishment of Suarez prompted media speculation that the Uruguayan could be tempted to leave England, but Rodgers said the club would work to keep him in the right frame of mind in preparation for his eventual return to action next season.

"Last week was difficult and I spent a lot of time talking to Luis," Rodgers said.

"We just move onto that -- he's suspended now for 10 games, so our focus is on our plan for Luis, to keep him fit and focused."

After Daniel Agger and Jordan Henderson gave the visitors a 2-0 half-time lead, Daniel Sturridge claimed a brace, before further goals from substitute Fabio Borini and Henderson consigned Newcastle to their heaviest home defeat since 1925.

Rodgers was full of praise for his goalscorers, as well as Brazilian playmaker Philippe Coutinho, who created Sturridge's first goal with a delicious scooped pass and tormented the home defence throughout.

"We talked during the week about our penetration. We've got some wonderful technicians but we've also got wonderful pace," Rodgers said.

"Coutinho can play in a couple of positions but he's a master technician. He plays balls through to people and he was unlucky not to score himself.

"Daniel Sturridge could become one of the top strikers in Europe in the next three years, if he stays fit. And it was nice for Fabio Borini to get a goal off the bench after being out for so long (with a shoulder injury)."

Newcastle manager Alan Pardew was deeply critical of his side's display and promised to make changes ahead of their final three games, which include trips to West Ham United and Queens Park Rangers, followed by a home game with Arsenal on the season's final day.

"Unfortunately, today we got off to a bad start and never got going. It was an awful performance from us," he said. "As far as I'm concerned, we're going to have to do something about that for next week.

"The most important message is that we have to stick together now. As a group, we have to get ourselves disciplined for next week because we got ran ragged today."

Pardew also criticised French full-back Mathieu Debuchy, who was sent off after receiving a second yellow card for an ugly lunge at Coutinho just before Henderson curled in Liverpool's sixth goal.

"You've got to keep your head in those situations," Pardew said. "He was a bit rash with that challenge, and off he goes."