Brendan Rodgers has been hailed as one of the most innovative young managers in the Premier League. 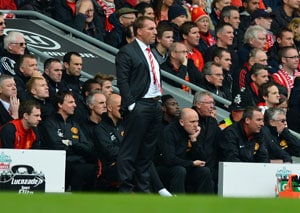 Brendan Rodgers has been hailed as one of the most innovative young managers in the Premier League.

But he reached for the old explanations of wishing for a change of luck after he was left searching for his first Premier League win as Liverpool boss following a 2-1 defeat by arch-rivals Manchester United at Anfield on Sunday.

Defeat left Liverpool in the bottom three and without a league win under Rodgers, brought in to replace sacked Anfield hero Kenny Dalglish.

But a defiant Rodgers said there was still time for the club to turn their season around as Arsenal did last term when a shaky start culminated in Champions League qualification.

"I remember last year Arsenal didn't get off to a great start," Rodgers said. "We are seeing some positive moments. I have got great confidence, the group have been absolutely fantastic.

"We are all behind it. Very soon our luck will change."

This was Liverpool's first home fixture since an independent report absolved their supporters of blame for the deaths of 96 of their fellow fans during a 1989 FA Cup semi-final at Sheffield Wednesday's Hillsborough ground.

Sentiment alone, however, did not help Liverpool improve upon their worst start to a league season for a century.

They dominated for the majority of the match, even after being reduced to 10 men following Jonjo Shelvey's 39th-minute red card for a two-footed lunge on Jonny Evans.

Liverpool captain Steven Gerrard's volley then broke the deadlock before Rafael curled in an equaliser and Robin van Persie scored from the penalty spot after Glen Johnson was adjudged to have brought down Antonio Valencia.

"We are bitterly disappointed with the result, I thought the best team lost," said Rodgers.

"Of what we could control I thought the players and performance level was outstanding, what we couldn't control were decisions by the referee.

"If Shelvey gets sent off for having both feet off the ground then Evans has to get sent off for that as well if you watch the replays.

"It was one of those days where we never got any decision which could have helped us at all and when you lose a man you need some help."

As Shelvey left the field he had an angry exchange of words with United manager Sir Alex Ferguson.

The midfielder apologised for the tackle but not for his reaction afterwards.

"I apologise to the fans for getting sent off but no way was I pulling out of that tackle in a game of that importance. I'm sorry," he wrote on Twitter.

Ferguson was bemused by the 20-year-old's reaction.

"He blamed me! But he is young and he will realise the stupidity of it," said the Scot.

"Jonny Evans went for the ball but Shelvey was nowhere near and could have given Jonny Evans a really bad injury - he was very lucky actually."

Ferguson, whose side moved to within a point of early season leaders Chelsea, added: "I thought we were poor. Over the last four years we have allowed the (Anfield) crowd to get at us a little bit.

"We played better in the second half but it was against 10 men and Paul Scholes, Michael Carrick and Ryan Giggs' experience got us through," explained Ferguson following United's first win at Anfield since 2007.

"We haven't played well here for the past four years and we can do better but at least we got a result. It is a turning point for us."