Villa put on striker Darren Bent to replace Gabriel Agbonlahor in the 57th minute, but he wasted a good chance for an equalizer by heading over the crossbar with the goal at his mercy after Benteke's shot had rebounded off Duke. 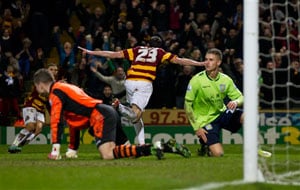 Fourth-tier Bradford pulled off another major surprise in the League Cup on Tuesday, beating Aston Villa 3-1 in the first leg of their semifinal to move one step away from the club's first major final since 1911.

Bradford followed up its stunning win over Arsenal on penalties by holding its own against another Premier League club, taking a 2-0 lead after goals from Nahki Wells in the 19th and Rory McArdle in the 77th. Andreas Weimann gave Villa a valuable away goal in the 83rd but Carl McHugh restored the more comfortable two-goal cushion with a powerful header in the 89th.

Villa can still turn things around at home, but is facing a much tougher task than expected after wasting a number of scoring opportunities against the League Two club. The second leg is at Villa Park on Jan. 22.

"A draw would have been great -- 3-1 is absolutely amazing," Wells said. "We're buzzing. Ahead two goals, we just need to stay resilient."

Bradford's only major trophy is the 1911 FA Cup title, and it has struggled both financially and on the pitch since a brief stint in the Premier League between 1999-2001.

Villa dominated early but were repeatedly thwarted throughout the game by goalkeeper Matt Duke, while Christian Benteke had two headers just high early on.

Wells coolly slotted in a shot from inside the penalty area, after Villa failed to clear a corner and a shot from distance was deflected into the Bermudian striker's path.

"It was a good time to get the goal, it put us in a better position," Wells said. "It just gave us the spirit to keep going."

Villa put on striker Darren Bent to replace Gabriel Agbonlahor in the 57th minute, but he wasted a good chance for an equalizer by heading over the crossbar with the goal at his mercy after Benteke's shot had rebounded off Duke.

McArdle then headed home a cross in the 77th minute to give the hosts a two-goal lead before Weimann pulled one back for Villa when he turned the ball home at the far post five minutes later.

That may have been enough to give Villa a clear edge going back home, but McHugh gave Bradford real hope of reaching Wembley when he launched himself at Blair Turgott's cross to plant a hard header into the net.

"We knew it was coming with the set pieces, but we never defended them well at all," Villa manager Paul Lambert said. "We have another chance to retrieve this. We will have to see what happens in a fortnight's time."

In the other semifinal, Chelsea hosts Swansea on Wednesday.

Comments
Topics mentioned in this article
Football English Premier League Aston Villa Bradford Andreas Weimann
Get the latest updates on ICC T20 Worldcup 2022 and CWG 2022 check out the Schedule, Live Score and Medals Tally. Like us on Facebook or follow us on Twitter for more sports updates. You can also download the NDTV Cricket app for Android or iOS.