Midfielder Gary Jones said he was "lost for words" and described it as a "magical day", while chairman Mark Lawn said he would happily take on either Chelsea or Swansea City in the February 24 final. 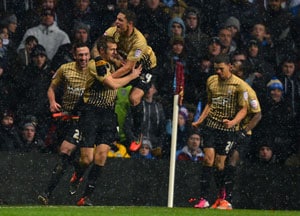 Bradford City's players struggled to suppress their amazement after pulling off an astonishing 4-3 aggregate win over Premier League Aston Villa to reach the League Cup final.

Bradford, from English football's fourth division, had already eliminated Arsenal and Wigan Athletic earlier in the competition and they stood on the brink of the final after winning 3-1 in the first leg.

They were made to endure a nervy finish at Villa Park, however, with Andreas Weimann's 89th-minute goal taking Villa to within one goal of forcing extra time before the final whistle sounded to confirm Bradford's ticket to Wembley.

FA Cup winners in 1911, Bradford have not reached a major final since and will become the first fourth-tier club since Rochdale in 1962 to grace a League Cup final.

Given that the Bantams were quoted at odds of 10,000-1 to win the tournament at the start of the season, their giant-killing run represents one of the most remarkable achievements in English football history.

"This is dreamland," said goalkeeper Matt Duke, whose razor-sharp reflexes played a pivotal part in Bradford's success over the two legs.

"Hopefully we will have a great following at Wembley and do the club proud. I am not convinced it will ever sink in.

"You dream of this as a kid, playing at Wembley, and like I say, I just want to do the club proud."

Villa made a storming start to the second leg of the semi-final and went ahead on the night when Christian Benteke met Joe Bennett's left-wing cross with a deft near-post volley in the 24th minute.

However, James Hanson drew the Bantams level with a bullet header in the 55th minute and Phil Parkinson's side clung on to reach the final despite Weimann's late intervention giving the hosts a 2-1 victory.

"I can't believe it, it really hasn't sunk in yet," Hanson told Sky Sports moments after the final whistle.

"The lads dug in in the first half and I thought we were going to have our backs to the wall tonight (Tuesday).

"But we were actually pretty comfortable in the second half and we held on well."

Midfielder Gary Jones said he was "lost for words" and described it as a "magical day", while chairman Mark Lawn said he would happily take on either Chelsea or Swansea City in the February 24 final.

"I don't care who we get in the final -- they will probably both batter us," he said. "Chelsea will have to declare at half-time if we play them!"

Should Bradford win the final, they would qualify for the Europa League, and Lawn quipped: "If we get into Europe, I'll have to start learning some languages!"

Villa manager Paul Lambert pulled no punches in his assessment of his team's failure, admitting that he was "embarrassed".

"We got the second goal, but it was too little, too late. It is no good doing that after the horse has bolted," he said.

"Good luck to Bradford and congratulations for going through. It is a great achievement and anything can happen in the final."

Villa's next assignment is a trip to second-tier Millwall in the fourth round of the FA Cup on Friday, while they will resume their bid to drag themselves away from the Premier League relegation places at home to fellow under-achievers Newcastle United on January 29.

Comments
Topics mentioned in this article
Football English Premier League Aston Villa Andreas Weimann Christian Benteke Joe Bennett
Get the latest updates on IPL 2020, check out the IPL Schedule for 2020 and Indian Premier League (IPL) Cricket live score . Like us on Facebook or follow us on Twitter for more sports updates. You can also download the NDTV Cricket app for Android or iOS.