Rival betting firms Betfred and Paddy Power have seen enough of the Premier League race to take the gamble of paying out early on Manchester United winning the title, despite the fact there are still 12 matches to play. 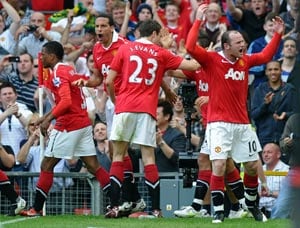 Rival betting firms Betfred and Paddy Power have seen enough of the Premier League race to take the gamble of paying out early on Manchester United winning the title, despite the fact there are still 12 matches to play.

Betfred boss Fred Done has risked facing the wrath of his fellow United supporters, paying out early again despite twice having his fingers burnt by making such a move before, including when Alex Ferguson's side were overhauled by neighbours City in the dying minutes of last season.

That decision cost the Salford-born bookmaker over £1 million (1.173 million euros) and led some fans to accuse him of jinxing the Old Trafford outfit, having also paid the price for a similar move when Arsenal clawed back a huge deficit in 1998.

However, with United again a dozen points ahead of their nearest rivals following a 2-0 defeat of Everton, Done has seen enough to declare them champions for a record 20th time.

"After it all went wrong last year, my missus made me promise to never do it again, but with United 12 points clear with just 12 games left the title race is over - so my punters can collect their dough on United." explained Done.

Irish bookmakers Paddy Power, had already stolen a march on their competitors by paying out on United to finish top of the table, even before they had claimed their victory on Sunday.

A spokesman for the firm declared: "The fat lady might not be singing yet but she's definitely getting warmed up.

"We can't see United letting their lead slip and, with Real Madrid to come in midweek (Champions League first-leg), we thought we'd take some of the pressure off Fergie (Ferguson) and give punters an early payday."

Comments
Topics mentioned in this article
Football Chelsea Arsenal Manchester United Manchester City Wayne Rooney Nicklas Bendtner Mark Hughes Alex Ferguson English Premier League
Get the latest updates on India vs Australia Series, check out the India vs Australia Schedule for 2020-21 and Ind vs Aus live score . Like us on Facebook or follow us on Twitter for more sports updates. You can also download the NDTV Cricket app for Android or iOS.