Blackburn on the rack as Swansea bounce back

Swansea City made sure of their place in the Premier League for next season and sent Blackburn a step closer to the drop with a 3-0 victory at the Liberty Stadium. 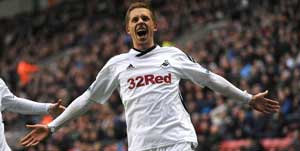 Swansea City made sure of their place in the Premier League for next season and sent Blackburn a step closer to the drop with a 3-0 victory at the Liberty Stadium.

Goals from Gylfi Sigurdsson, Nathan Dyer and a Scott Dann own goal were enough to see off Rovers as Swansea scored their first win in five matches.

Blackburn felt sure they should have had a penalty inside three minutes when Ayegbeni Yakubu appeared to be hauled down five yards from goal. Moments later, Grant Hanley's far post header landed on the top of the Swansea net.

It was an impressive start from the visitors who were in desperate need of a boost after their last gasp defeat to Liverpool.

It took a dozen minutes for the Swans to launch their first attack of note and when they did, Blackburn were forced to concede a corner after Dyer's delightful reverse pass to Angel Rangel.

At the opposite end, Hanley was again the target for Morten Gamst Pedersen after David Dunn had been fouled. This time, Hanley was wide of Michel Vorm's far post.

It was another far post header, this time from Swansea's Scott Sinclair, that caused Blackburn their biggest worry. Thankfully, for Rovers that is, Bradley Orr's last ditch challenge diverted the ball high and wide.

Hanley's contribution to the game was becoming ever greater. Another header inside the Swansea penalty area was Blackburn's next best opportunity while at the other end he was first to react to a searching cross from Rangel.

It was that type of game, high on endeavour but short on star quality until Sigurdsson popped up with two wonderful efforts in as many minutes.

The first was beaten away for a corner by Robinson. The second, with his left foot, gave Swansea a 37th-minute lead. It was an exquisite finish from the loanee.

Three minutes from half time, the game was over as a contest when a shocking piece of defending from Dann allowed Sinclair and Danny Graham to tee up Dyer. The former Southampton winger made no mistake from eight yards.

A slick move involving Graham and Sigurdsson should have brought goal number three, two minutes into the second half. Graham teased in a cross towards Sinclair only to see Jason Lowe arrive in the nick of time and steer the ball away to safety.

David Dunn scuffed a shot goalward after Dann had headed back a free kick from Pedersen, but that was as good as it got for the visitors.

Rangel shot over the top of Robinson's goal after 52 minutes and Graham twice caused a stir in the penalty area as Blackburn found themselves at sixes and sevens.

But it was a piece of individual magic from Sinclair that brought the third goal after 63 minutes. Last season's England under 21 star dribbled his way through the Rovers defence before setting up Sigurdsson whose shot rebounded back off the post, against Dann and into the empty net.