A knee injury forced the 24-year-old for out seven months last season but having made just 11 appearances all season he ended the summer with World Cup and Premier League winners medals. 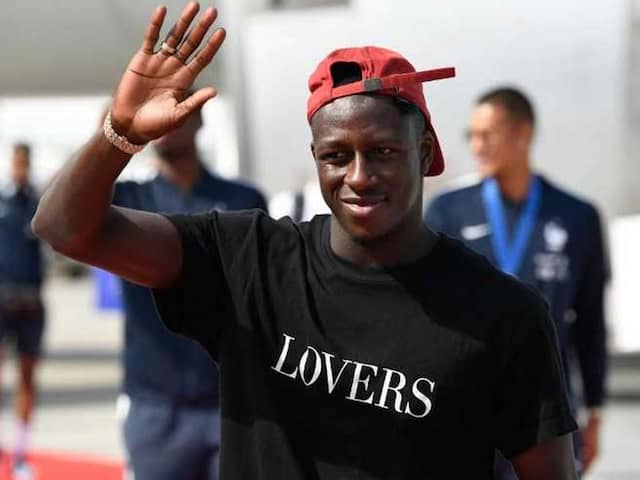 Mendy's gold World Cup medal hasn't left his sight since picking it up in Moscow.© AFP

Benjamin Mendy is ready to make up for lost time at Manchester City and add to his ever-growing list of silverware. A knee injury forced the 24-year-old for out seven months last season but having made just 11 appearances all season he ended the summer with World Cup and Premier League winners medals. Mendy played only 40 minutes for Les Bleus in the group stage  against Denmark and ticked off just enough matches for City to have something hanging round his neck during the celebrations. His gold World Cup medal hasn't left his sight since picking it up in Moscow.

"I have the medal in my pocket," Mendy told reporters in Miami ahead of City's pre-season friendly here this week.

"Before the World Cup I said to the dressing room, 'if I win I'll come back with the medal'.

"This (the medal) is my skin now. For four years it's my skin for a life. In four years we have a new World Cup but now we are the kings.

"Before we were going, everybody was talking about their country. I said that you'll see the French win but some other guys said no.

"After we played we spoke but every time it's with respect. When we won against Argentina I spoke with Kun (Aguero) straight after the game with a text.

"When England won their quarter-final I spoke with Raz (Raheem Sterling) and Kyle (Walker). Everything is like this. So when I come back I don't go "waaaaaaah!" I say hi and we speak."

Mendy's involvement on the pitch with Didier Deschamps' team was brief but his influence in the dressing room ensured he remained an important part of the jigsaw for France.

"For the World Cup you don't care. It's better if you're playing but it was an amazing moment with the team and the staff," he said.

"We are a big family and we knew what we wanted to do - to win the World Cup and it's what we did. It was amazing to go back to Paris. If you play or you don't play, I enjoyed it.

"You need to have a very big team and a big family with the team-mates and staff too."

Mendy joined up with Pep Guardiola's side in Florida ahead of their clash with Bayern Munich in the International Champions Cup and is hopeful of being fit and raring to go for the season-opener at Arsenal.

"Really, I didn't have any low moments, " he said. When I go to the hospital some people [are worse than] me. It's just one knee though.

"All the time I was asking about when I can do the next thing. I was always asking. The time went so quick. I remember when I went to the hospital in Barcelona, I asked before my surgery whether I could go to the World Cup.

"The surgeon said: 'I'm not a magician, but normally yes.' That was my goal.

"I want to play. When you win one time you want to win a second time. You don't want to stop. I am so, so, so excited for keeping going like this with the team."

Seeing old friend Paul Pogba, his cross-city rival in Manchester, excel during France's campaign made it even more special.

"Playing with him in the national team is a dream," said Mendy.

"Sometimes we spoke about this when we were younger, about 13, and now we are in the France team.

"It's amazing. Before every game he was the one speaking big words to the team."

Manchester City Benjamin Mendy English Premier League Football
Get the latest Cricket news, check out the India cricket schedule, Cricket live score . Like us on Facebook or follow us on Twitter for more sports updates. You can also download the NDTV Cricket app for Android or iOS.