Benteke, who had previously submitted a transfer request, committed his future to the club until 2017 after a "full and frank discussion" with Villa manager Paul Lambert. 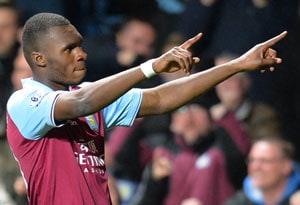 Aston Villa striker Christian Benteke performed a transfer U-turn on Friday as he withdrew his request to leave and signed a new contract with the Premier League club.

Benteke committed his future to the club until 2017 after a "full and frank discussion" with Villa manager Paul Lambert.

It was a sudden change of heart from the 22-year-old after Villa confirmed only 11 days ago that he had asked to leave following a series of reports linking the Belgian international with a £25 million move to Tottenham.

"I had a full and frank discussion with Christian Benteke on his return to training this week regarding his future. It is my opinion that the best thing for Christian is to remain at Aston Villa," Lambert said.

"I'm delighted, having time to re-evaluate his future, Christian has decided to commit to the club. It's a huge bonus and I'm sure the supporters are every bit as delighted as me to have him on board and raring to go."

Kinshasa-born Benteke added: "I spoke with the manager when I returned to training and we had a good talk. I am very happy to be back here in Birmingham and at Aston Villa, and to sign a new contract.

"The end of last season was very good and the lads were very strong. It was not easy but we came through it and the confidence is high. So everyone knows what we have to do now -- be better. I need to be better than last year."