Wolves stepped up their bid to qualify for the Champions League as Leander Dendoncker sealed a 1-0 win at Aston Villa that lifted them into fifth place in the Premier League on Saturday. 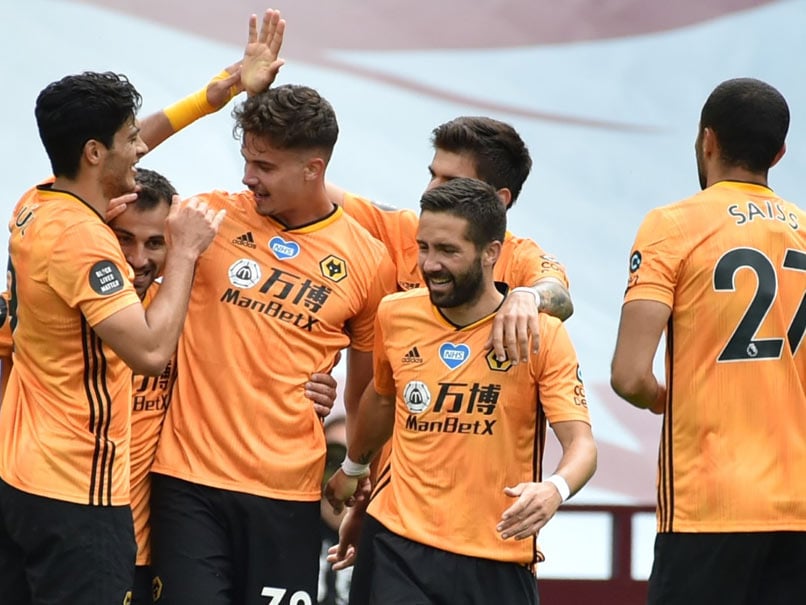 Leander Dendoncker scored the only goal of the game, lifting Wolves to 5th place in the table.© AFP

Wolves stepped up their bid to qualify for the Champions League as Leander Dendoncker sealed a 1-0 win at Aston Villa that lifted them into fifth place in the Premier League on Saturday. Nuno Espirito Santo's side made it three successive victories since the Premier League restart thanks to Dendoncker's clinical finish in the second half. Wolves have yet to concede a goal following the coronavirus hiatus and are now just two points behind fourth-placed Chelsea and three ahead of sixth-placed Manchester United.

Both Chelsea and United have a game in hand on Wolves due to their FA Cup involvement this weekend.

But with fifth place potentially offering Champions League qualification if second placed Manchester City's European ban is upheld, Nuno's men are firmly in contention to play in the continent's elite club competition for the first time in 60 years.

Wolves are unbeaten in eight league games and have won three successive top-flight away matches for the first time since 1980.

In contrast, their struggling midlands rivals Villa are without a win in eight league games and remain rooted in the relegation zone on goal difference.

Second bottom Villa have now played a game more than the teams around them and have just six matches left.

With fixtures against Liverpool and Manchester United up next, Dean Smith's team are in serious danger of an immediate return to the Championship.

Smith had complained about the fixture schedule that saw his team playing for the fourth time in 11 days.

His fears were confirmed when defender Matt Targett limped off with a leg injury after 10 minutes.

Wolves were on top and Joao Moutinho's free-kick was flicked goalwards by Raul Jimenez, but Orjan Nyland was well placed to save.

Matt Doherty led another threatening Wolves raid, the wing-back bursting into the Villa area to shoot into the side-netting.

Villa captain Jack Grealish was being deployed in a central midfield role rather than his usual wider position and he tested Rui Patricio with a low strike from the edge of the area.

Nyland had got away with a horrendous mistake in Villa's first game of the Premier League restart when he carried the ball into his own net against Sheffield United, only for Hawk-Eye to fail to award the goal.

Luck was on Nyland's side again when he threw the ball straight to Diogo Jota late in the first half, but the Wolves forward shot hurriedly over the bar with just the blundering keeper to beat.

Douglas Luiz was narrowly off target from long-range as Villa tried to change the momentum in the second half.

But Nuno sent on Adama Traore after the break and the electric winger immediately made an impact.

Dancing through the Villa midfield, Traore found Jimenez and his raking pass reached Jonny, who teed up Dendoncker on the edge of the area.

Unleashing a perfectly-placed low drive, the Belgian midfielder beat Nyland in style for his fifth goal of the season.

Aston Villa Leander Dendoncker English Premier League Football
Get the latest updates on SA vs IND 2021-22, check out the Schedule and Live Score . Like us on Facebook or follow us on Twitter for more sports updates. You can also download the NDTV Cricket app for Android or iOS.