But Wenger confirmed that his search for a remedy will not include bringing back the club's former striker Thierry Henry for a second comeback season. 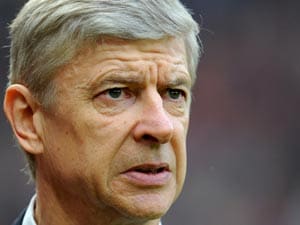 Arsenal manager Arsene Wenger expressed frustration with his side's inconsistency and criticised their mental sharpness after they needed an own goal to snatch a draw from Southampton only three days after beating Newcastle United 7-3.

But he confirmed that his search for a remedy will not include bringing back the club's former striker Thierry Henry for a second comeback season.

"We didn't create a lot after having scored five at Reading, seven against Newcastle," the Frenchman complained. "The goal chances we created were not a lot and our game lacked purpose, lacked penetration, lacked speed - all the qualities that we usually have and that we didn't see tonight.

"It is frustrating. It is nothing to do with the physical side. In a game of that magnitude against a Southampton team that was really highly determined, I felt we lacked purpose in our game, and it was more mental than physical. We lacked sharpness.

"There is no specific reason. We prepared normally, we prepared well, and, maybe Southampton deserve some credit as well. They fought for every single ball until the last second."

It was Theo Walcott's free kick that was put into his own net by Guly Do Prado, but otherwise Walcott was anonymous after his hat-trick on Saturday.

Wenger explained: "Overall, nobody was put in good positions to express something offensively.

"We didn't have enough quality to get them out of position, but it is difficult to identify any specific thing. We have to analyse that together and see why because we have big games coming up and we want to get back to our normal performance."

Wenger also ruled out re-signing Henry for a second time after bringing him back on a temporary deal a year ago. "He is going away somewhere," he said. "He is not ready and for the moment we are not on that case."

But he confirmed that he hopes to be active during the transfer window. "I will be active, yes," he said. "We are looking everywhere and we are open-minded. We want to strengthen the squad if possible and if we find the right players."

Nigel Adkins, the Southampton manager, was much more pleased with his side's performance, and the point that took his team out of the bottom three, ahead of Wigan Athletic on goal difference.

"Arsenal have been beating teams out of sight but Artur (Boruc, the goalkeeper) has had nothing else to do apart from the deflection and we created some good opportunities for ourselves," he said. It shows how far we have come. We got a hiding (6-1) at The Emirates, but we have a growing maturity. Tactically we were bang on and yet again the players put good performances in."

Arsenal's equaliser two minutes later was even messier. Walcott curled in a free kick from the left that seemed to be going harmlessly to Boruc, but Do Prado, Southampton's Brazilian winger, swung a foot at the ball at the near post and deflected it into his own net.

Do Prado tried to make amends with a shot that Szczesny had to save well and a corner kick that Sagna almost put into his own net, while Ramirez had a goal disallowed for a foul on Laurent Koscielny that few people noticed apart from the referee's assistant.

Walcott, anonymous on his return to his former club, hit a shot straight at Boruc - Arsenal's only effort on target.

Wenger said: "Considering the performance, I don't think we deserved more, but it's two points lost if you look at our target over Christmas."

Comments
Topics mentioned in this article
Football Arsenal Manchester City Mark Hughes Alex Ferguson English Premier League
Get the latest updates on ICC T20 Worldcup 2022 and CWG 2022 check out the Schedule, Live Score and Medals Tally. Like us on Facebook or follow us on Twitter for more sports updates. You can also download the NDTV Cricket app for Android or iOS.