Arsene Wenger was overcome with emotion before and after Arsenal's last game of the Premier League campaign. 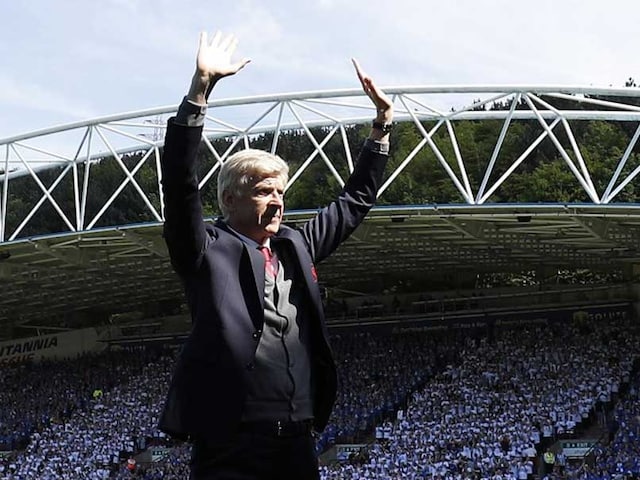 Arsene Wenger brought the curtain down on his 22-year Arsenal reign with a 1-0 win at Huddersfield.© AFP

Arsene Wenger admitted it was hard to keep his emotions in check as the Arsenal manager brought the curtain down on his 22-year reign with a 1-0 win at Huddersfield on Sunday. After 7,895 days and 1,235 games, it was 'au revoir' to Wenger as the Frenchman took charge of Arsenal for the last time. Wenger has been on a nostalgia-tinged long goodbye since Arsenal announced last month that his historic reign would come to an end once the season was over. And the 68-year-old was overcome with emotion before and after Arsenal's last game of the Premier League campaign.

"Of course it is very emotional after 1,235 games for the same club," Wenger said.

"To enjoy it we had to win it, winning football games is what makes me happy and the boys did it.

"Do I feel relief? Not really, I'm sad. At some stage it has to end, I wish everyone well, the fans have been great until the end and I wish the club well for the future."

Greeted by headlines asking 'Arsene who?' when he was hired in 1996, Wenger departs firmly established as Arsenal's greatest manager.

He won three Premier League titles, including the famous 2003-04 unbeaten season, and seven FA Cups, while revolutionising English football with his ground-breaking use of sports science and scouting of players from previously untapped markets like Africa.

Fittingly, it was a 38th minute goal from Gabon striker Pierre-Emerick Aubameyang -- the last major signing of the Wenger era -- that ensured his manager went out on an uplifting note.

"I believe I had an impact on the club as a whole because the club is in a strong position, it has a new stadium, a new training ground and new players," Wenger said.

"With the results we won three Premier League titles, played 49 games unbeaten and I'm very proud to have won seven FA Cups too."

Having spent the last two seasons enduring abuse from Arsenal fans frustrated by their club's failure to win the title since 2004, Wenger's farewell tour has been played out to a soundtrack of praise.

Wenger was given a guard of honour before kick-off at the John Smith's Stadium and the feelgood atmosphere peaked in the 22nd minute -- marking his number of years in charge -- when he was afforded a lengthy period of applause from the entire stadium.

Two planes flew over the stadium, carrying messages reading; "Merci Arsene, we will miss you too" and "One Arsene Wenger".

But for all the stirring goodbyes and Wenger's hints that he wanted to stay on for another year, Arsenal's struggles this season sealed his fate as they missed out on a place in the Champions League for a second successive campaign.

A sixth place finish -- 37 points behind champions Manchester City -- was a reminder how far Arsenal's standards had slipped in Wenger's final years.

Yet the fine form of Aubameyang since his January arrival encouraged Wenger to claim he has left Arsenal in good hands.

"I see a bright future for my successor because the team has a good attitude and quality," he said.

"The team needs some additions and if they get them I think they will compete for the Premier League title."

Whether Wenger will return to management elsewhere or settle for a director of football role with one of Europe's superpowers remains to be seen.

"I will stay in football for sure. Whether that is managing or not...I am addicted and I don't think that can be cured," he said.

"It will be hard to adjust of course but I will have to deal with that. I will remain an Arsenal fan above everything else."

His Gunners journey almost at an end, Wenger returned to the pitch long after the final whistle and sought out the last remaining Arsenal fans.

Handing one supporter his tie, Wenger basked in the warm glow of their applause for a few moments before disappearing into the sunlit evening.

Comments
Topics mentioned in this article
Arsenal Huddersfield Town Arsene Wenger English Premier League Football
Get the latest Cricket news, check out the India cricket schedule, Cricket live score . Like us on Facebook or follow us on Twitter for more sports updates. You can also download the NDTV Cricket app for Android or iOS.