Arsenal's Arsene Wenger says he is not moving out

The 63-year-old Frenchman, the Gunners' manager since 1996, has recently been linked to a move to Paris St Germain following several trophyless seasons with north London side Arsenal. 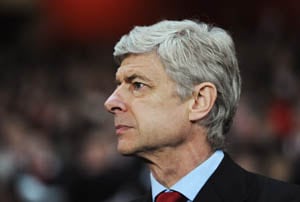 Arsene Wenger has no intention of leaving Arsenal before his current contract expires, he said on Friday and indicated he could yet stay with the club beyond 2014.

The 63-year-old Frenchman, the Gunners' manager since 1996, has recently been linked to a move to Paris St Germain following several trophyless seasons with north London side Arsenal.

But Wenger insisted all he was concerned about or the time being was securing a top-four finish for Arsenal that would ensure they once again qualified for the Champions League.

The financial implications of Arsenal's move to the Emirates Stadium from their nearby former home ground of Highbury tied Wenger's hands in the transfer market to a certain extent compared to the likes of Manchester United, Manchester City and Chelsea.

But new 'front-loaded' sponsorship means Wenger, who saw star striker Robin van Persie leave last season to join United and win the Premier League in his first term at Old Trafford, is set to enter the transfer market with a reported £100 million to spend.

"Every football game excites me and football in general still excites me -- the love for this club as well," Wenger said Friday ahead of Saturday's trip across London to relegated QPR.

"I have answered that question (about PSG) already. I respect my contracts.

"I want this club to do well -- that is my basic feeling.

"We have gone through a period that was very sensitive. We are coming out of it now, in a much stronger position financially.

"I believe the club is in a very strong position for the future."

Wenger's 'Invincible' Arsenal side were crowned Premier League champions in 2003/04 without losing a match before he took the club from Highbury across the road to the 60,000-seater Emirates Stadium and has ensured a constant supply of Champions League football despite being confronted by bigger-spending rivals.

However, some Arsenal fans have started to grow tired of Wenger's repeated assurances of a brilliant Arsenal future given it is now eight years since the club last won a major trophy -- the 2005 FA Cup.

Wenger again reiterated on Friday that Arsenal were well-placed on all fronts to end that silverware drought.

"I believe a big club should be run where everybody does his job and I try to do my job. I believe that this club is today in a very, very strong position and has gone through a very sensitive period in a very intelligent way. After that, everything is here to have a great future.

"We have a good fanbase, we have now a strong financial situation, we have good young players and a squad with a bright future with the quality of the young players we have. It is just to manage it well now."

Arsenal head to Loftus Road on the back of a seven-match unbeaten league run which has seen them move into the coveted fourth place, the last available Champions League spot on offer to English clubs.

Now, in a three-way London battle, the Gunners are a point behind Chelsea and two ahead of Tottenham Hotspur, albeit having played one match more.

Chelsea, who reached the Europa League final on Thursday, head to Manchester United on Sunday, before hosting Spurs on Wednesday.

"The only thing we know is it can only be decisive if we win our games," Wenger said. "That is compulsory. We focus on winning our games and then look at the results of other teams.

"The most important in that is not to lift your head, just focus on our job and continue our strong run."

Comments
Topics mentioned in this article
Football Arsenal Liverpool Manchester City Chelsea Manchester United Newcastle United Mark Hughes Njazi Kuqi Alex Ferguson English Premier League
Get the latest updates on ICC T20 Worldcup 2022 and CWG 2022 check out the Schedule, Live Score and Medals Tally. Like us on Facebook or follow us on Twitter for more sports updates. You can also download the NDTV Cricket app for Android or iOS.