Arsenal's hopes of qualifying for the Champions League suffered a fatal blow as Neal Maupay fired Brighton to a last-gasp 2-1 win, while Watford snatched a late 1-1 draw against Leicester. 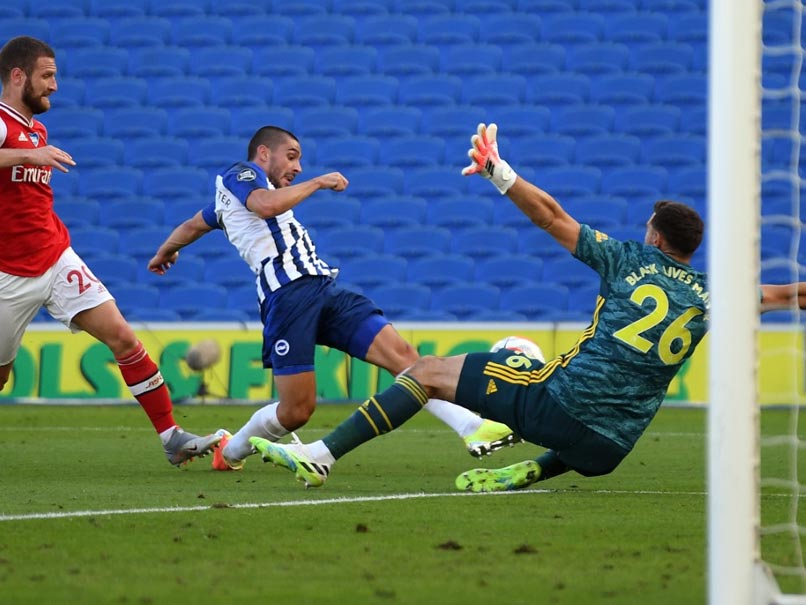 Neal Maupay scored deep into stoppage-time to give Brighton their first win of the year.© AFP

Arsenal's hopes of qualifying for the Champions League suffered a fatal blow as Neal Maupay fired Brighton to a last-gasp 2-1 win after Gunners keeper Bernd Leno was stretchered off, while Watford snatched a late 1-1 draw against Leicester on Saturday.  In the first full weekend of English top-flight matches since the coronavirus shutdown in March, Arsenal's faint chances of finishing in the top four faded further.

Their cause wasn't helped by the controversial injury to Leno, whose screams echoed round the empty Amex Stadium after he slid awkwardly when he came to collect the ball just inside his own penalty area.

The German seemed to twist his knee and was given oxygen during several minutes of treatment.

Leno appeared frustrated with Brighton forward Maupay, shouting and pointing a finger at him while being stretchered to the tunnel.

Maupay had been the Brighton player challenging Leno for the ball when he fell.

Already hit by injuries to Granit Xhaka and Pablo Mari in their 3-0 defeat at Manchester Cityon Wednesday, Leno's departure was another blow to Gunners boss Mikel Arteta.

Nicolas Pepe put Arsenal ahead in the 68th minute with a superb strike, the Ivory Coast winger cutting in from the right and curling into the far corner from the edge of the area.

Adding insult to injury for Arsenal, deep into stoppage-time Aaron Connolly helped the ball on to Maupay and he kept his head for a fine finish.

Maupay took a post-match swipe at the Gunners, saying: "Some of their players need to learn what is humility, especially one of them. He was talking all game, he was saying bad things.

"I don't want to say because I could be in trouble. I just said that this is what happens when you talk too much on the pitch."

Arteta's team are languishing in ninth place, eight points adrift of the top four, and may not even qualify for the Europa League.

Arteta didn't blame Maupay for Leno's injury, saying: "I think it was very unfortunate. I don't think he wanted to hurt him, but it is not looking good.

"It is unacceptable in the way we lost the game. The fact we missed so many chances and we did not compete for the second goal."

But in a remarkable conclusion, Hornets centre-back Craig Dawson launched himself into an acrobatic effort moments later to claim his first goal for the club.

Watford climbed to 16th place, one point above the relegation zone.

"It is a really strange day. For the players who thrive on atmosphere and emotional attachment it will be difficult to get used to," Watford manager Nigel Pearson said.

Leicester remain third, six points ahead of fourth-placed Chelsea, as they look to secure a spot in next season's Champions League.

Following the trend from the first four matches of the restart this week, a minute's silence was observed for victims of coronavirus.

Teams took a knee in support of the Black Lives Matter cause before kick-off in every match, all of which are being played behind closed doors for the rest of the season.

On Sunday, Liverpool will play for the first time since the top-flight hiatus when the title chasers make the short trip to Merseyside rivals Everton.

If the Reds beat Everton, they can wrap up the title with another victory against Crystal Palace at Anfield on Wednesday.

However, Liverpool's inevitable title will now come with an asterisk according to some pundits, who claim the Premier League's new normal of matches behind closed doors with more substitutes allowed has taken the shine off the leaders' achievements.

"Now I have had a lot of time to read. I had to Google the word 'asterisk'. I only knew the word from a comic!" Klopp said.

"Whoever will be champions, it will be historic because it is a year that we will never forget. Give us an asterisk, yes."

Watford Bernd Leno Neal Maupay English Premier League Football
Get the latest updates on ICC T20 Worldcup 2022 and CWG 2022 check out the Schedule, Live Score and Medals Tally. Like us on Facebook or follow us on Twitter for more sports updates. You can also download the NDTV Cricket app for Android or iOS.