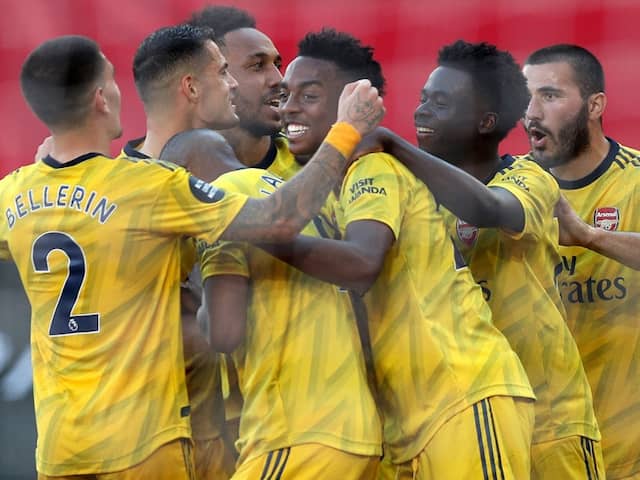 Arsenal's win over Southampton lifted them into ninth place.© AFP

Arsenal kept alive their hopes of qualifying for Europe as Eddie Nketiah punished a howler from Southampton goalkeeper Alex McCarthy to inspire a much-needed 2-0 win on Thursday. Mikel Arteta's side were handed the opener in the first half at St Mary's when Nketiah picked off McCarthy's pass and fired home. Joe Willock doubled Arsenal's lead late in the second half, moments after Southampton's Jack Stephens was sent off for bringing down Pierre-Emerick Aubameyang. Arsenal had suffered two successive defeats following the Premier League restart after the coronavirus hiatus.

That wretched run effectively ended their bid to reach the Champions League and sparked criticism of Arteta's decision to give new contracts to David Luiz and Cedric Soares despite their problems with poor form and injuries respectively.

Against the dispiriting backdrop, Arsenal's success at St Mary's, which lifted them into ninth place and kept them in the hunt for a Europa League berth, was a welcome tonic for Arteta.

"It was an important win for us. We had two very difficult weeks with a lot of things that happened to us," Arteta said.

"I was concerned because after the defeat at Brighton where we threw the game away, it really touched the team."

Arsenal had kicked off with 40 points, which ranked as their joint lowest tally after 30 games of a Premier League campaign.

Matteo Guendouzi was dropped just days after reports that Arteta has grown frustrated with the French midfielder's behaviour, while Alexandre Lacazette and Mesut Ozil were left on the bench.

Guendouzi reportedly taunted Brighton players about how much he earns during Saturday's match and clashed with Seagulls striker Neal Maupay after the final whistle, with his absence at St Mary's put down to "squad management" by Arteta.

"No (it wasn't punishment for Brighton)," Arteta said. "I don't like to make any decisions to send messages.

"The messages that I send to the team or individually are very open and I'm clear with how I feel.

"Whatever issue we have internally, I will resolve it in a private way."

Despite all the turbulence around Arsenal at present, they started brightly in scorching hot temperatures on the south-coast.

Aubameyang should have put Arsenal ahead early on but, after racing into the penalty area, the Gabon forward's close-range shot cannoned off the bar and bounced clear.

The Gunners were making all the running and their pressure was rewarded in the 20th minute thanks to the gift from McCarthy.

Chasing down Jan Bednarek's ball to McCarthy, Nketiah forced a woefully misdirected pass from the Saints keeper, pounced on the loose ball and slotted into the empty net.

It was the 21-year-old's second Premier League goal of the season and his fourth in all competitions for the Gunners after a loan spell at Leeds.

Arsenal had blown the lead at Brighton and have a poor away record this season, so alarm bells were ringing when Southampton striker Danny Ings was left unmarked to volley over.

But Stephens saw red for his foul on Aubameyang on the edge of the area and Willock slotted home from close-range to seal the points in the 87th minute.

Sean Dyche's team took the lead in the 73rd minute when Rodriguez got across his man at the near post and stooped to head in Dwight McNeil's cross.

Burnley, rocked by speculation Dyche might quit at the end of the season, remain in mid-table, while Watford are just one point above the relegation zone.

"I've always said that somewhere down the line one party wants the other one gone or another party comes in. That is not to do with this moment," Dyche said when asked about his future.

"I've been saying that for six out of seven-and-a-half years when I've been linked with various situations and I'm still here."

Watford English Premier League Football
Get the latest Cricket news, check out the India cricket schedule, Cricket live score . Like us on Facebook or follow us on Twitter for more sports updates. You can also download the NDTV Cricket app for Android or iOS.